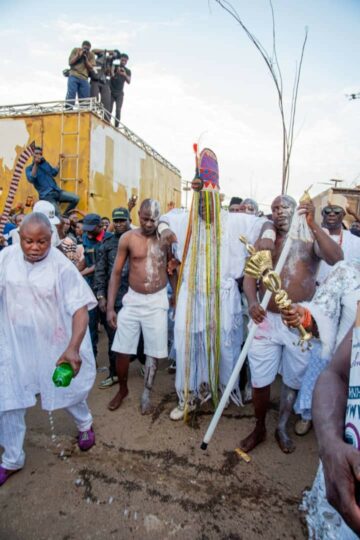 The Ile Oodua palace of the Ooni of Ife, Ooni Adeyeye Enitan Ogunwusi, Ojaja II on Saturday was filled to the brim as scores of international tourists, traditional rulers across the country and political office holders among other top dignitaries trooped in for the celebration of the 2021 edition of groundbreaking Olojo Festival.

The festival which climaxed on Saturday was preceded by several spiritual and traditional activities including a seven days seclusion period for the Ooni.

The frontline monarch fasted and prayed during the period before coming out on Friday night with prayers for the land and the world generally.

Addressing the pool of crowd on behalf of the Osun State Governor, Adegboyega Oyetola, Deputy Governor Benedict described the 2021 Olojo festival as a step higher than the previous editions, thanking the Ooni for his innovations towards internationalizing the prestigious Yoruba culture and tradition.

The Governor assured that his administration was putting a necessary mechanism in place to build Yoruba Museum of global standard in Ile-ife, adding that the document of the land allocated for the proposed project has been handed over to the state government by authorities of the Obafemi Awolowo University, Ile-Ife.

According to him, the project was to further accord Ile-Ife its rightful status as the cradle of the Yoruba race, noting that the project, when completed would be a supporting tourism infrastructure for pilgrimage to the ancient city.

At the event which was characterized by dance, various cultural display and prayers for the world in general, major stakeholders especially those in the political class were implored to defend and promote the ancient Yoruba culture.

Top of the day was the Aare procession by the Ooni to and from Okemogun, where he was received by the Osogun, the Ogun priest.

The happy crowd who formed a thick walkway for the Ooni, cheerfully prayed loudly as they sight the Aare crown which is the oldest crown globally.