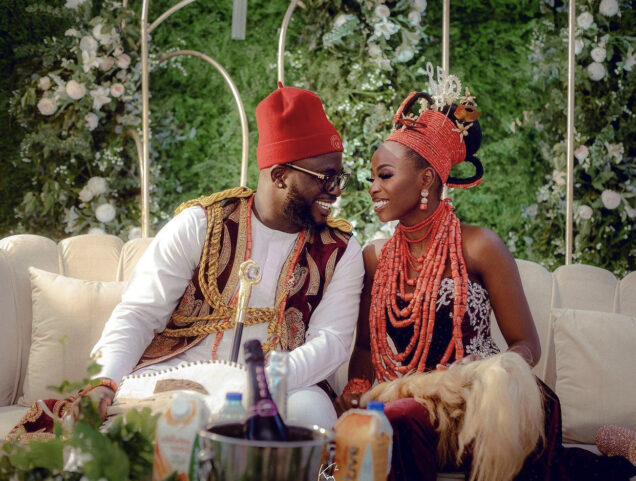 Famous Instagram comedian, Emmanuel Iwueke also known as Crazeclown and his fiance, Jojo walked down the aisle on Saturday.

The event which held at the Eko Hotel and Suites was attended by many entertainers, including Don Jazzy, Basketmouth, Ubi Franklin, Jowi Zaza, Soso Soberekon and Beverly Osu.

The wedding witnessed performances from singers such as T-Classic, Johnny Drille and May D with Mc Funnybone as the master of ceremony.

Following the Igbo culture, CrazeClown, and his friends were all dressed in Isi Agu attire.

The colours, the laughs and love, filled the entire atmosphere and we absolutely caught the vibe. With their Igbo-Edo traditional wedding.

The highlight of the event was when the newly wedded couples were presented a new Benz car as gift by Delta lawmaker Friday Osanebi.

CrazeClown is a graduate from Kharkiv National Medical University in Ukraine.

He was one of the first Nigerians to carve a niche for himself in the comedy skits field. The talented comedian often features antics of his ‘son’ Ade who is in his skits, mostly to show how a typical Nigerian father behaves.

Dressed in his elderly man routine with an off-white agbada and a cap that is customarily known to the Yoruba tribe, Crazeclown delivers structured hilarity to over 2.9 million followers and regular sponsored posts from various brands.

Catch all the thrills from #EMJO2021 traditional wedding with pictures below.