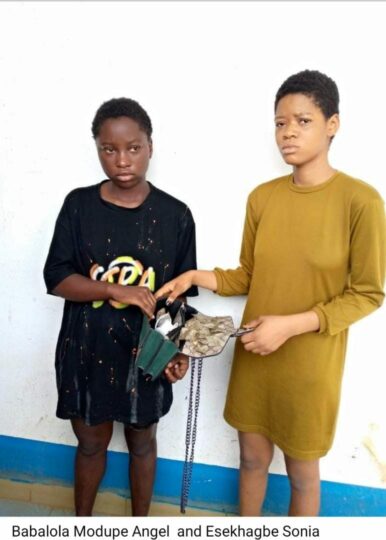 They were arrested on Thursday 23rd September, with 21 wraps of skunk, according to NDLEA’s spokesman, Femi Babafemi in a statement on Sunday.

Babafemi also said another lady, Chioma Okocha, 25, was arrested the following day Friday 24th Sept when she tried to deliver 200 grams of Crack Cocaine to a customer at an eatery in Benin.

“Earlier same day, men of the Irrua Area Command of the Agency working on actionable intelligence evacuated 10 bags of cannabis sativa weighing 135kg in Amahor bush in Igueben area. The exhibits were stored ready for transportation to other parts of the country.

“In the same vein, men of the Okada Area Command in the early hours of Sunday 26th Sept evacuated 2,937 kilograms of cannabis sativa from Utese forest in Ovia North East local government area of Edo state,” he said.

Babafemi added that in Kaduna state, Mrs. Fatima Musa, a widow and notorious drug dealer was arrested on Saturday 18th Sept at Afana village in Zango Kataf LGA while moving 12kg of cannabis to Jos.

“She had earlier been convicted and sentenced to six months imprisonment on 7th July 2020 following her arrest on 3rd March 2020 with 45kg of cannabis sativa,” he said.

While commending the officers and men of the FCT, MMIA, Edo and Kaduna Commands of the Agency for the raids, arrests and seizures in the past week, NDLEA’s chairman, Buba Marwa urged them not to rest on their oars until the menace of drug trafficking and abuse is reduced to the barest minimum in every part of the country.