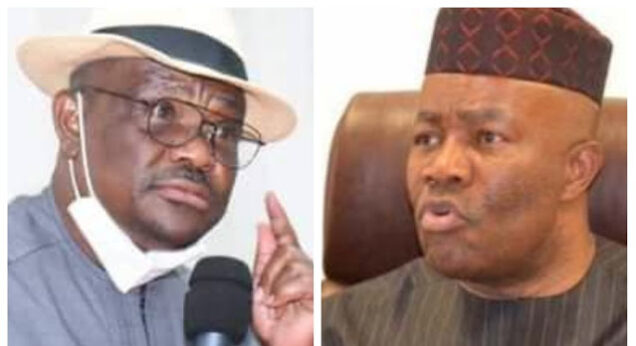 Rivers Governor Nyesom Wike and the Minister of Niger Delta Affairs Senator Godswill Akpabio attacked each other verbally in an event attended by President Muhammadu Buhari on Tuesday.

The event was the official inauguration of the Muhammadu Buhari Nigeria Police Protection Unit comprising 68 flats and other facilities built in Port Harcourt, Rivers State by the Niger Delta Development Commission (NDDC).

Others at the event include Wike, Akpabio, the Minister of Police Affairs, Muhammad Maigari Dingyadi; the Inspector-General of Police, Alkali Usman; Chairman, Senate Committee, Senator Peter Nwaoboshi and his counterpart in the House of Representatives, Olubunmi Tunji-Ojo among others.

However, Akpabio stirred the argument as he used the platform to speak about party politics and performance.

The minister while speaking to Wike said he would not join other party bigwigs to appeal to him (Wike) to defect to the APC because the ruling party has enough crisis.

Addressing Wike, Akpabio said: “I will not join others to lobby you to the APC. We have enough problems in the APC already”.

The Minister, while later alluding to the encomiums poured on Wike by Tunji-Ojo following his performance in Rivers, however, made a U-turn saying he could only declare Wike a performing Governor if he joined the APC.

However, Wike didn’t waste time descending on the minister.

He refused to acknowledge Akpabio as a Minister in his order of protocol and referred to him as a former Governor.

The governor said he wondered why Akpabio turned the inauguration into a political campaign.

Wike, juxtaposing the crises in the Peoples Democratic Party (PDP) and the APC, added that he would not leave “where there is malaria to a place where there is cancer”.

He said: “I thought we came to inaugurate this project. I didn’t know Akpabio will turn it into a political campaign. I prefer to stay where there is malaria to where there is cancer. Malaria is treatable but cancer at the fourth stage is not treatable. I don’t want to die now”.

Wike added that Akpabio enjoyed the title, uncommon, when he was a Governor under the PDP.

He said the ministry is a cash cow for politicians in the country.

Wike said: “NDDC has been a cash cow for politicians.

“These are people who will make sure money is available for politics. You have portfolio contractors from Abuja. Every now and then, the MD will be running to Abuja.”

The governor also took a swipe at some lawmakers in the National Assembly who lobby for which projects to be included in the NDDC budget.

Wike explained that the problem he has with the NDDC is a lack of synergy with the state governments in the region.

Speaking further, he noted that he filed a lawsuit against the commission, accusing NDDC of picking up a project in a state thereby distorting the government’s plan.

“The road you want to do is not your road. You won’t liaise with the state to say ‘look what project do you want in this state.

“If you ask all the nine states in the Niger Delta and say State A, what kind of project do you want NDDC to execute, we are not interested in who will be the contractor. Our interest is that we are synergizing with you so that you don’t repeat those things we are doing.”