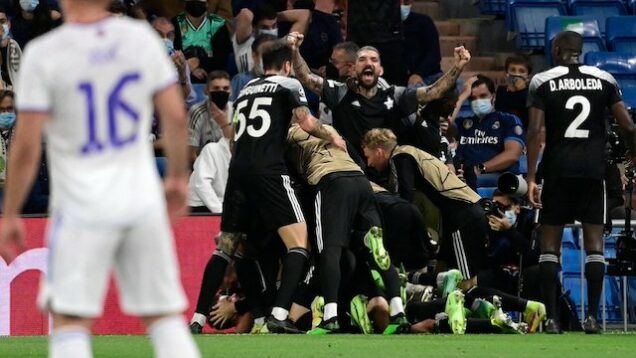 Moldovian team FC Sheriff stunned Real Madrid at the Bernabeu in the Champions League on Tuesday, handing the Spanish giants an embarrassing 2-1 defeat.

The Moldovians, who were playing in the Champions League for the first time will go into the records as the first team from their country to beat Madrid.

They now lead Group D, with six points after beating Shakhtar Donetsk 2-0 in their first game.

The Moldovians showed they had a mission when striker Djasur Yakhshibaev opened scoring in the 25th minute.

The scoreline remained the same at end of first half despite Madrid dominating possession for most of the time.

Madrid restored some order when Karim Benzema equalised in the 65th minute via a penalty.

But in the dying minutes of the game, Sheriff’s midfielder Sebastien . Thill inflicted a great wound on Madrid’s pride when he found the winner with a thunderbolt of a shot.

He was assisted by Adama Traore.

It was a game that Madrid ought not to lose statistically.

The Spanish team had a total of 19 goal attempts, 11 of them on target.

They had 11 blocked shots. 13 corner kicks and 67 percent possession.

FC Sheriff based in Tiraspol, a city located in the unrecognised Transnistria, was founded in 1997 as Tiras Tiraspol.

It was rebranded in 1998 as FC Sheriff, after the name of its main sponsor, Sheriff, a company which operates various industries in the breakaway state

The club quickly established itself within Moldovan football.

“The Wasps” recorded their debut in the first league in the 1998–99 season, when they also won their first trophy, the Moldovan Cup.

They are now the first ever Moldovan side to beat Real Madrid in their own stadium.