My takeaways from UNGA76, the protests and others 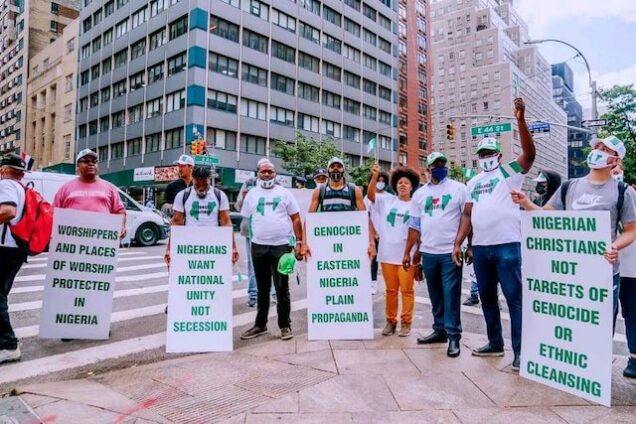 The Buhari supporters in New York

Throughout last week in New York, the United Nations General Assembly – the congress for the world – gathered for its annual re-affirmation of the principles upon which the organisation was founded.

These are the principles of territorial integrity of nations, of sovereignty, and the rights of all peoples to be treated equally; and of the unacceptability of tribalism, ethnic bias, racism, and fascism – the poison which twice caused World War to be fought, and saw the United Nations founded to uphold the principles which would ensure one would never be fought again.

They are also the principles upon which Nigeria was founded – and which make us one people.

The certainty that we are united as a country of over 500 languages, nearly 400 communities, 36 states – and one nation.

What unites us are our differences. What divides us are those who, for their own nefarious ends, seek to use them to prise us apart.

While President Buhari was focusing on the problems plaguing the nation and in some instances asking for international support to deal with such, a coalition of groups protested outside the UN building.

This happened with all countries- the United States, UK, India, Iran, China, Egypt- about everyone and about every conceivable issue but most especially climate change, gender and animal rights among others.

There are some from the so-called “Yoruba nation” group and the so-called “Indigenous People of Biafra” (IPOB) terrorist group who worked together to protest outside the United Nations building in New York.

They sought to claim astonishingly that, somehow, they have earned rights through violence, murder of law enforcement agents and the innocent, and extortion to run their own affairs.

Many Nigerians at home were disconcerted by the tribal bullying of government officials as they moved to carry out their diligent work between the Nigerian Mission in New York and the UN building, a walkable distance of less than 400 meters.

Protests are allowed by all who had anything to say. Tribal bullying is uncivilised. So is any effort to strengthen insurgency in the country.

This is an extraordinary misinterpretation of the principles of the United Nations. There is no place in or before this organisation for racists, ethnic cleansers, and those who associate with them.

On the other hand, those pro-Buhari/pro-Nigeria demonstrators in immaculate green-white-green deserve to be praised for the maturity and decorum with which they carried on, ignoring crude insults and abuse from an opposition campaign inspired and conducted in accordance with rule book of the Nazi against Jews, Hutu extremists against the Rwandan Tutsi.

In Nigeria today, IPOB has created an armed terror wing, the Eastern Security Network – complete with a fascistic logo – to coerce through violence innocent Nigerians, forcing them to protest against those of other ethnicities and religious beliefs and to lockdown states and stop people from the pursuit of their legitimate aspirations.

They seek power by demonising other communities and targeting those Nigerians who speak other dialects. Any group associating with this recognised terrorist group is demonstrating there is little difference in their beliefs, or their intent.

President Buhari came to the UN to tell the world that his government is rebuilding sustainably from the COVID-19 pandemic, responding to the needs of the planet, respecting the rights of the people and supporting the UN; that Nigeria is guaranteeing fundamental human rights and tackling climate change to achieve environmental sustainability.

The Nigerian leader also gave firm assurances that Government is taking measures to organize transparent elections at all levels, fighting to provide security for all and sustainable socio-economic development.

In this context, his government is focusing on economic diversification, infrastructure development, job creation and human capital development as drivers of economic growth and stability.

There are indeed also major initiatives to promote foreign direct investment and export.

Government, he similarly assured, is investing huge resources to facilitate the emergence of a secure, stable, viable, resilient and prosperous nation.

At the sub-regional level, President Buhari was acclaimed for leading in the fight against terrorism and the enthronement of democratic culture and practice.

At the International level, the support in the fight against global terrorism, leading the campaign against corruption, illicit financial flows and supporting assets recovery also endeared the President to his audiences.

As a good global citizen and player, President Buhari gave clear indication of the willingness on the part of Nigeria to continue championing a just world order with free trade and free movement of goods and persons, and greater regional integration based on respect, justice and fairness.

Success in getting Nigerians into key positions in international organizations is a result of Government’s vision of global peace and concord.

This is also reflected in peacekeeping roles around the world. The Nigerian Technical Aid Corps programme continues to provide technical support outreach to countries of the Caribbean, Africa and the Pacific.

As the biggest country in Africa, the Government takes seriously its leadership role on the continent and strives to promote African prosperity.

In addition to all these, President Buhari promised to take steps towards providing concrete frameworks for institutionalized diaspora engagement in Nigeria.

Hopefully we will soon have Diaspora voting in elections in Nigeria.

On a parting note, Nigeria, the President emphasised, will always remain true to the values and principles of the United Nations. And we will always stand in defence of those principles against those who do not.

In all, about 109 heads of state and government addressed the Assembly during the General Debate in person and nearly 60 delivered speeches through pre-recorded video statements.

President Buhari last addressed the UN General Assembly session in 2019. In 2020, he and other world leaders submitted recorded video statements as heads of state and government could not physically attend due to the coronavirus pandemic.