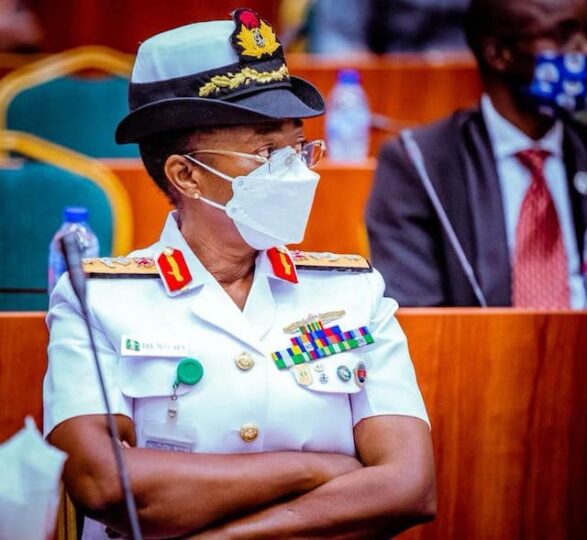 The Nigerian Navy has disowned the comment by one of its senior officers, Commodore Jamila Sadiq Abubakar, that Chadian soldiers were selling guns for as cheap as $20-$30.

Jamila made the comment on Monday while contributing to a bill seeking to establish the National Commission Against the Proliferation of Small Arms and Light Weapons.

It was at the public hearing organised by the House of Representatives in Abuja.

“They do not have armoury. So most of their arms that are being donated by — I don’t want to be specific — the developed countries in the name of assisting us are compounding our problems in Nigeria because you find out that each average Chadian soldier has 20 to 30 arms underneath his bed.

Abubakar, an international maritime lawyer is the first female Commodore in the history of the Nigerian Navy.

In a statement today, the spokesman of the Nigerian Navy, Suleman Dahun said the view of the officer does not reflect the position of the Navy.

Dahun said the Navy appreciates the indelible contributions of “our regional partners/neighbours in the fight against small arms and light weapon trafficking.”

“The House of Representative Committee on National Security and Intelligence yesterday 27 September, 2021 held a public hearing on 4 Bills including the Bill for an Acts to establish the National Commission against proliferation of small arms and light weapons (HB 10).

“This is as it relates to neighbours with which Nigeria maintains robust diplomatic security relationships/collaboration, a personal opinion that is at variance with the person of the NN.

“The NN wishes to categorically dissociate itself from the view of the senior officer. The NN appreciates the indelible contributions of our regional partners/Neighbours in the fight against small arms and light weapon trafficking.

“Pertinently, effective and sustained regional cooperation towards ensuring maritime security in the Gulf of Guinea is a key priority of the NN.

“Against this background, the service acknowledges the regional security efforts of our neighbouring countries within the existing framework of bilateral and multilateral cooperations and commits to working assiduously to strengthening these arrangements. Onwards Together.