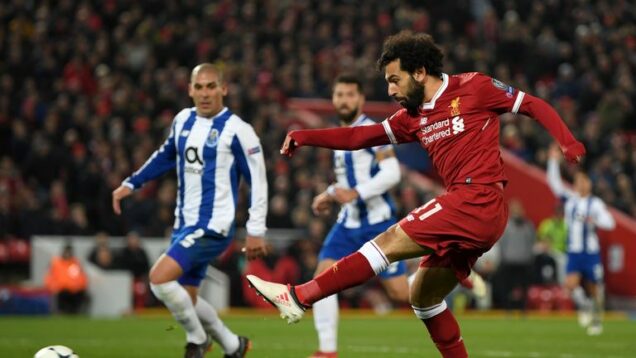 Liverpool will endeavour to make it two wins from two in the 2021-22 Champions League when they travel to the Estadio do Dragao for Tuesday evening’s Group B clash with Porto.

Sergio Conceicao’s side opened their continental campaign with a goalless draw against Atletico Madrid, while the Reds saw off AC Milan 3-2 in an Anfield thriller.

A goal-fest was never likely to be on the menu when Atletico and Porto locked horns on the opening matchday, and with Diego Simeone’s side only mustering six shots as the visitors chalked up five, there were no goals to be had at the Wanda Metropolitano.

Chancel Mbemba saw red in the dying embers, but by that point, it was too late for Antoine Griezmann and Luis Suarez to make their side’s extra man count as Conceicao’s side claimed a highly creditable point at the home of the La Liga champions.

Still unbeaten in all competitions this term, Porto warmed up for the visit of Liverpool in ideal fashion with a 2-1 league success away to Gil Vicente, as Mehdi Taremi caught Ziga Frelih off his line from 40 yards before Sergio Oliveira won the day with an 89th-minute free-kick.

The hosts may certainly need such long-range inspiration to produce a positive result against Liverpool, but they can take confidence from their 18-game unbeaten run in all competitions since defeat to Chelsea in last year’s quarter-finals, while they have won their last nine on the bounce at home.

Conceicao’s side also held Manchester City to a goalless stalemate and claimed a 2-1 win over Juventus at the Estadio do Dragao last term – as well as beating Marseille and Olympiacos with two clean sheets to boot – so Liverpool cannot expect as much joy in front of goal on matchday two.

Prior to AC Milan’s trip to Anfield in gameweek one of the 2021-22 Champions League, the two sides had only ever met twice before in any competition – the infamous 2005 final and slightly more low-key 2007 final of Europe’s elite tournament.

The encounter on Merseyside would have been fit for the showpiece event, as Milan scored all three goals in the first half – Fikayo Tomori’s own goal preceding Ante Rebic and Brahim Diaz’s quickfire strikes – but Mohamed Salah and Jordan Henderson turned the tie on its head in the second half as Jurgen Klopp’s men came up trumps.

After also finding the back of the net three times in subsequent clashes with Crystal Palace and Norwich City, Liverpool kept their theme of three going against Brentford on Saturday, but their newly-promoted opponents demonstrated a clinical edge of their own in an end-to-end 3-3 draw.

Klopp’s side have therefore taken a slight hit to the momentum after their four-game winning run came to a grinding halt at the Brentford Community Stadium, but Saturday’s draw represented the fifth match in a row that Liverpool have chalked up a trio of goals, and they have won four and drawn one of their last five away games in the Champions League group stages.

Furthermore, Porto are winless in their eight meetings with Liverpool across all competitions since 2001, with Klopp’s side winning 2-0 at home before a 4-1 success at the Estadio do Dragao in the quarter-finals of their triumphant 2018-19 run.

Ivan Marcano and Fabio Cardoso could therefore form the center-back pairing against the Reds, with Wendell occupying the left-back spot, while first-choice goalkeeper Marchesin is thought to have a chance of making his first appearance of the season here.

Marko Grujic should start against his former club after playing the full 90 against Atletico, while Oliveira seems set to battle Mateus Uribe for the final spot in Conceicao’s engine room.

Meanwhile, Liverpool’s Thiago Alcantara may be keeping Harvey Elliott company in the treatment room until after the international break, while Neco Williams remains doubtful with an ankle issue but has returned to training alongside Naby Keita.

Klopp is expected to make at least a couple of alterations ahead of the weekend’s clash with Manchester City, with Kostas Tsimikas and Takumi Minamino both hopeful of earning recalls to the left-hand side.

Roberto Firmino’s return to fitness could see him displace Diogo Jota at the tip of the attack, while James Milner and Curtis Jones will battle for the final midfield spot, but Trent Alexander-Arnold has reportedly not traveled with the squad.

According to Sports Mole, Liverpool is expected to defeat Porto by 2 goals to 1.