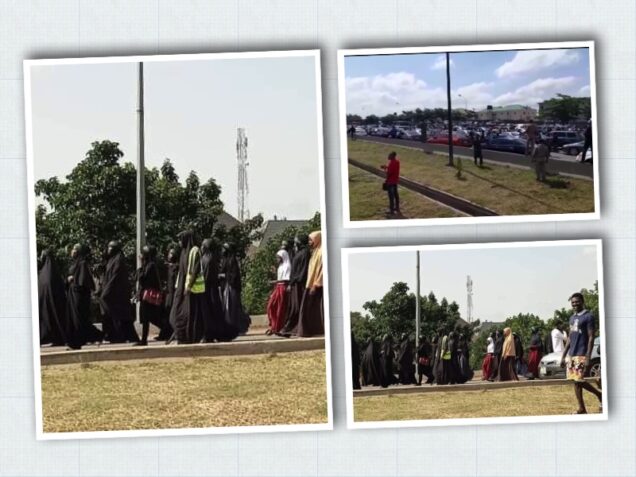 Police in the Federal Capital Territory, Abuja, along with the military killed no fewer than eight members of the Islamic Movement of Nigeria, on peaceful march in the city.

DSP Josephine Adeh, the spokesperson for the police, said that the protesters who came from Niger, Bauchi, Gombe, Borno and Kaduna states caused mayhem in the FCT.

Josephine said the suspects, carrying charms, stones and some minor explosives were nabbed at the Kubwa-Gwarimpa axis of Abuja.

She added that they stormed the area in large numbers, obstructing traffic and throwing stones and explosives at police operatives.

Adeh said police operatives had been able to disperse the protesters and brought the situation under control.

According to her, no casualty was recorded but some of the protesters sustained injuries.

But this claim has been faulted for inexactitudes.

According to reports, the Shiites were taking part in a religious procession on the major road in Abuja.

The procession marked the Shi’ite religious ritual of Arbaeen, when security forces opened fire on them.

Arbaeen marks the end of a 40-day religious mourning period for Imam Hussein, grandson of the Prophet Mohammad.

Abdullahi Muhamed, an IMN member, said participants were walking peacefully along the Abuja-Kubwa expressway when a combined team of police and soldiers fired tear gas and live bullets at them.

He said eight people were shot dead and two were taken away by the security forces.

The IMN leader, Ibrahim Zakzaky, was released from detention after being acquitted in July of eight criminal charges including aiding and abetting homicide, unlawful assembly and disruption of public peace.

Zakzaky and his wife had been in detention since December 2015, when they were arrested in Zaria after a clash in which the army killed an estimated 350 people at an IMN compound and a nearby mosque.

The victims were given a mass burial.