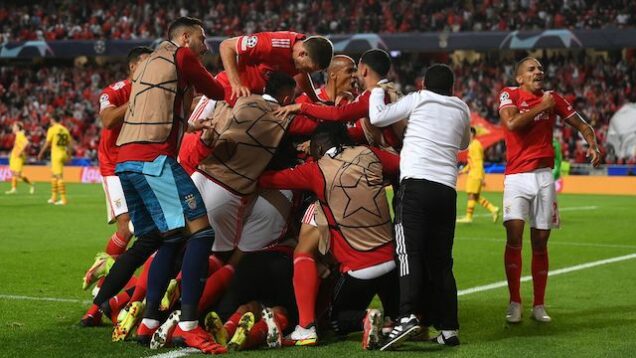 Barcelona are now sitting bottom of Group E after they were beaten 3-0 by Benfica in their Champions League encounter.

It was their second successive loss in the group.

They also lost 0-3 to Bayern Munich at Camp Nou, for arguably their worst start in the Champions League since 2000-01.

The Catalan Club even ended the match with 10 men, after Eric Garcia was expelled in the 89th minute.

Barcelona began to have a taste of the dreadful night on the 3rd minute when Darwin Nunez put Benfica ahead.

Although the visitors were soon dominating, they were extremely wasteful in front of goal.

Benfica held firm at the back.

Eventually they seized their opportunity to finish Barca off through Rafa Silva and a late Nunez penalty.

The loss will make Ronald Koeman’s era as the Barcelona coach come to an end quickly.