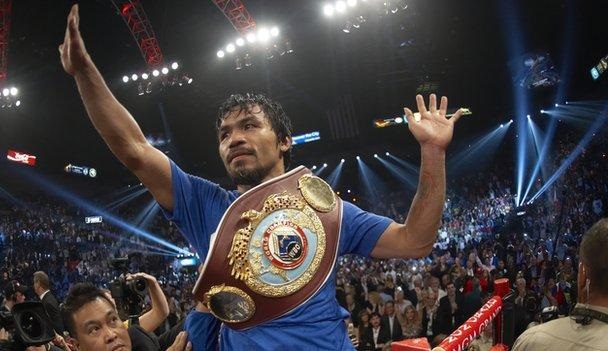 Boxing legend Manny Pacquiao has officially hung his gloves and set to focus on his political ambition of becoming Philippine president.

Pacquaio who is an eight-division world champion and a senator in his country has already declared interest in running for president in his country by 2022.

In a video posted on his verified Facebook page on Wednesday, he described retiring from boxing as the hardest decision of his life, adding boxing had given him “the chance to fight my way out of poverty” and “the courage to change more lives.”

“I just heard the final bell. Boxing is over,” said an emotional Pacquiao, the only man to hold world titles in eight different divisions.

“I never thought this day would come as I hang up my boxing gloves,” he said as he thanked his fans all over the world.

“This is the hardest decision I have ever made, but I am at peace with it,” Pacquaio said.

His retirement from boxing followed a disheartening defeat to Yordenis Ugas in Paradise, Nevada on August 21. The younger Cuban boxer, who defected to the United States in 2010, beat Pacquiao by unanimous decision, retaining his WBA welterweight title. It was Pacquiao’s first fight in more than two years.