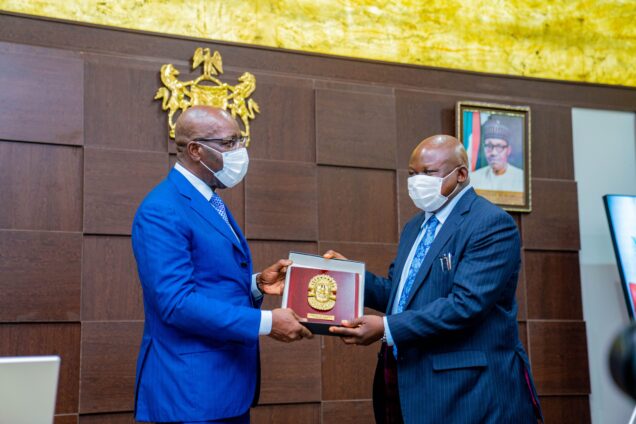 Governor Godwin Obaseki has promised to relocate the Benin Division of the Federal High Court from its present premises in Ikpoba Hill, to a better location.

He disclosed this when he received the President of the National Industrial Court, Hon. Justice Benedict Kanyip, who was on a courtesy visit at the Government House.

The entire two-story FHC building has been drenched in flood several times during heavy rainfall, as it is located inside a waterlogged area.

But the Governor has promised to build a befitting edifice for the court elsewhere.

According to him, “As a State, we will continue to support the court system, whether they are ours or federal.

“We are building another site for the Federal Court of Appeal. We are moving them from their present location, which has become difficult to work from; the same thing is planned for the Federal High Court.”

“We will continue to support and invest in the judiciary because we believe in the role of the judiciary in our political space. I won’t be sitting here as a Governor if we don’t have the strength of character of the judges in our court system. You are all witnesses to this.

“For us to have progress, stability, and enduring democracy, we must invest in all tiers of the judiciary system, particularly the magistrates. That is what we are doing in Edo.”

While commending the President of the National Industrial Court, Obaseki noted that since the establishment of the industrial court in the State, the government and people of Edo have enjoyed industrial harmony and peace.

“You have placed the industrial court on such a pedestal that people have come to respect the judgment from your court.

“We can proudly say that when the people go to your court, you don’t see them come back and begin to pursue endless appeals. We want to thank you, we want to appreciate you and encourage you to continue to keep this standard of your court.

“We want to appreciate you and say that your presence here has led to some industrial harmony for us,” he said.

Obaseki who hailed the role of the judiciary in maintaining law, peace and order in the State, and the sustenance of the country’s democracy, assured the judiciary of continuous cooperation and support to ensure more citizens have access to justice.

“For us in Edo, we have no confusion or doubt in our minds whatsoever as to the role of the judiciary in our democracy. If we must have a stable country, one that is progressive with economic growth, then, we must invest and respect the judiciary.

“We keep our promises. We are building accommodation for judges. We just completed the first set and are going to furnish it soon,” the Governor reassured.

Earlier, Justice Kanyip thanked the Governor for his government’s sustained investment in the judiciary.