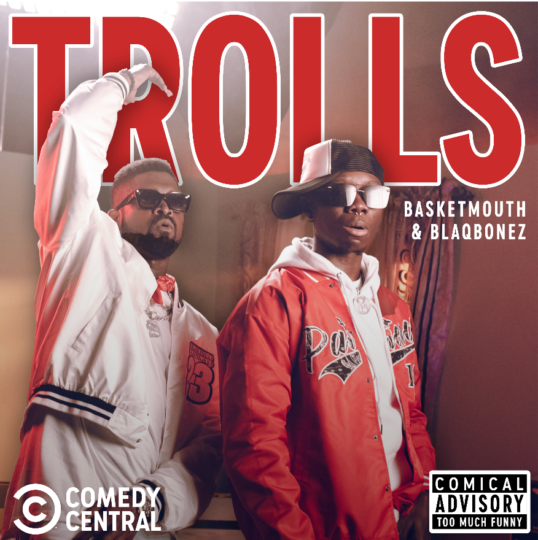 Nigerian comedian, Basketmouth, will be dropping the hilarious new track ‘Trolls’ on October 1, 2021, in celebration of Nigeria’s Independence Day, a perfect way to culminate the celebration of African culture at the heart of the EP.

As the final song from the Comedy Central EP, the song, Trolls (Bad Belle), is produced by Duktor Sett and directed by Khris Burton.

It will feature comedian Basketmouth and musician, Blaqbonez, with appearances from Romeo, NasBoy, Nasty Blaq, Kolomon and Brain Jotter.

“I am greatly honoured to have worked on this project because it combines two great loves of mine, Comedy and Music, and allows me to shine a fun light on Nigeria.

“There is no better day than Independence Day to drop this addition to the Comedy Central EP as it really does highlight how far we have come as artists and people, as a country and as a continent,” said comedian and musician Basketmouth.

Influenced by the ViacomCBS Networks Africa (VCNA) diversity of channels, the EP has already brought together different African artists from various genres from Amapiano, and R&B to Afrikaans pop. With some of the funniest comedians infusing styles and comedic flavours with a smorgasbord of musicians to create a comic relief mix-pot, it’s as much fun as you can have during a lockdown.

Commenting on the new development, Dillon Khan, Vice President, Comedy Central Africa, said, “It’s the diversity of heritage on the African continent that inspired our creative team to reinvent”funny”.

“Comedy provides us the license to push the envelope by expressing the realities of life in a satirical manner that will either make you roar with laughter or cringe from the artist’s authenticity of storytelling.

“This campaign’s intent is for all of us to pause and reflect on life with our funny bones. As with all our VCNA initiatives during the pandemic, we are committed to the continued investment in our amazing local talents and providing the continent’s comedians and musicians a platform to showcase their authentic art and storytelling.”

Senior Channels Manager, ViacomCBS Networks Africa, Solafunmi Sosanya, also added that “Comedy Central Africa has been able to bring laughter and comic relief into many spaces. We are especially proud of the diverse group of artists featured on this EP.

“Basketmouth is a great addition to the project that underlines our impact across the continent. The October 1 release is the perfect celebration of Nigeria’s independence, its people, and all that they represent; happiness, joy and lots of talent.”

All the songs feature themes from trending topics that are of cultural and social relevance with a dose of Comedy Central Africa humour.

Music videos from the EP are available to view on Comedy Central Africa’s YouTube page and will air to a Pan-African audience on the channel (DSTV Channel 122).

Comedy Central Africa dropped a new song daily from September 20th in the lead up to South Africa’s Heritage Day, and with the last surprise song in the EP featuring Basketmouth dropping on October 1 in celebration of Nigeria’s Independence Day, the leading brand channel for all things funny has truly held the flag high for a collective Pan-African heritage.

Watch out for the new song to be released on Nigeria’s Independence Day, October 1, 2021. Follow Comedy Central Africa on Twitter and Instagram (@ComedyCentralAF) on www.facebook.com/ComedyCentralAfrica to stay up-to-date.