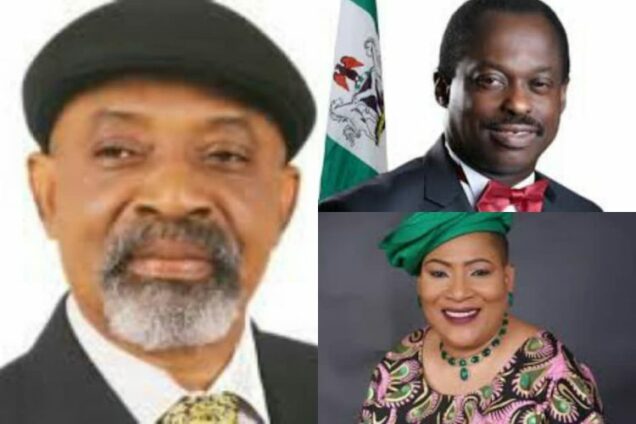 A statement by Mr Emmanuel Nzomiwup, the Media Officer to the Minister of Labour and Employment, Sen. Chris Ngige, made this known on Thursday in Abuja.

Justice Olufunke Anuwe, who delivered the judgment, dismissed the suit for having no merit.

It would be recalled that President Muhammadu Buhari, acting through the Minister of Labour and Employment, Sen. Chris Ngige, announced the suspension and the removal of those found guilty of N3.4 billion financial infractions.

Somefun and Nelson had gone to the court to contest their suspension and consequent removal.

This is on the grounds that the action not only violated some provisions of the NSITF Act but equally contravened the President’s directive through the Secretary to the Government of the Federation (SGF) that no minister should suspend or sack any head of an agency.

According to Justice Anuwe, the 1st to 4th defendants respectively, in the suit-NICN/ABJ/ 185/2020, were the Minister of Labour and Employment, the President of Federal Republic of Nigeria, the Attorney General of the Federation and the NSITF Board.

“The claimants had asked the court to determine whether having regards to the Provisions of sections 2, 3, 4,5,6,7 and 8 of the NSITF Act.

“That their suspension by the 1st Defendant (Minister of Labour and Employment) purportedly with the approval of the 2nd Defendant (President of the Federal Republic of Nigeria) does not amount to illegality, usurpation of the Powers of the Board and negation of due process of the law.

”The claimants also asked the court to determine whether having regard to sections 2, 3,4,5,6, 7 and 8 of the NSITF Act and circumstances of the suit, the defendant has the powers to suspend the Managing Director and Executive Directors from office.

”They equally asked the court to determine whether by the combined provisions of sections 6,7 and 8 of the NSITF Act and paragraph 3 and 5 of the circular with reference number SGF/0p/1S3/T/163 issued on May 19, 2020, the letter dated July 1, 2020, is not illegal, null and void.

”This is on the ground that the Minister of Labour and Employment has no powers to issue the said letters and in particular to communicate to the claimants the said decision of the President of the Federal Republic of Nigeria, suspending them from office,’ ‘she said.

Justice Anuwe also said that the claimants further asked the court to determine whether having regard to the combined provisions of Sections 36 (1) and (2) of the Constitution of the Federal Republic of Nigeria as altered and sections 6 and 8 of the NSITF Act.

”That is if the Minister of Labour and Employment acted properly when he suspended the claimants as Managing Director and Executive Director of the Board of NSITF.

”Also, purporting to have established prima facie infractions on the Financial Regulation and Procurement Act and gross misconduct against them in breach of the claimants constitutional guaranteed right to fair hearing,” she said.

In her judgment, Justice Anuwe considered issues 1 to 3 together and held that it was not the 1st Defendant (Minister of Labour and Employment) that suspended the claimants from office but the 2nd Defendant (President of the Federal Republic of Nigeria).

On the fourth pleading, Justice Anuwe submitted that the suspension of the claimants was a prelude to the investigation of the allegations made against them.

According to the Judge, suspension from work or office is a disciplinary procedure that keeps away an employee or appointee from being disciplined from duty for a fixed or terminal period or indefinitely pending investigation into the alleged misconduct.

Citing relevant authorities, she explained that at the stage of suspension, a fair hearing was not a privilege the claimants could insist to be accorded them before they could be suspended.

“The claimants are therefore misconceived as to their rights when they complain in this suit that their right to fair hearing was breached when they were suspended from office without giving them the opportunity to be heard.

“In sum, I have thoroughly considered all the questions submitted by the claimants for determination in the Originating Summons and all the four questions are resolved in the negative and against the claimants,” she said.

Justice Anuwe further dismissed the suit for having no merit.