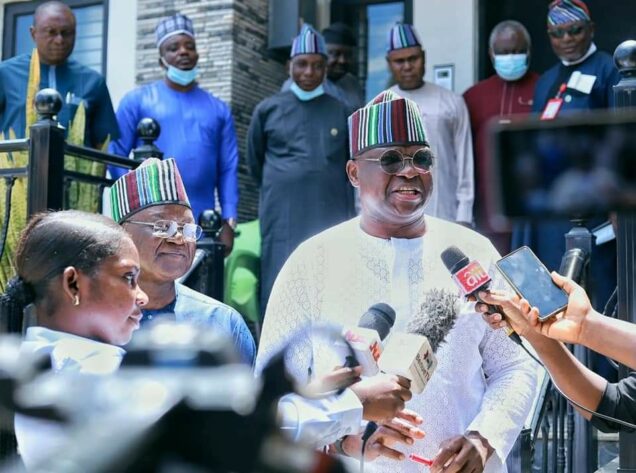 Ayo Fayose, former Governor of Ekiti State, said the People’s Democratic Party is prepared to wrestle power from the ruling All Progressives Congress in 2023.

Fayose said “APC is already gone” as he maintained that every Nigerian knows that the country under the APC administration has failed.

Fayose made this known on Thursday while fielding questions from Benue State Government House Correspondents shortly after holding a brief meeting with Governor Samuel Ortom in Abuja.

He said: “APC is already gone. Even if PDP did not say a word, the average Nigerian knows that there is hunger and the rate of killings is overwhelming. As a matter of fact, the insecurity is enough to tell you that APC is history in Nigeria and like I’ve always said, it is now for Nigerians to wake up and take their destiny in their own hands.”

He explained that “Nigerians should know they fell into the hands of APC in error and it is time for them to take their own destiny in their own hands. Let me assure you that everything is being put in place to ensure we take our inheritance back for the good of the nation and that is what our leaders are doing.”

He described Governor Ortom as a political icon whose forthrightness and capacity to speak truth to power without looking back even at the risk of his life has distinguished him among many leaders in the country and beyond.

Fayose added that Governor Ortom’s courage and determination to speak against evil was a clear indication that the actions of the office he occupies today would not go unnoticed several years to come.

In his words, “you cannot describe a man well enough. You can only describe his actions. By his actions, forthrightness, and capacity to speak truth to power without looking back even at the expense of his life, it is a clear indication that the office of the Governor will come and go, the uprightness in the man will abide by him and with him eternally.”

He continued, “the Governor of Benue has shown the strength of character in speaking against these evils bedeviling our country and in times like these, we can only wish him the best he wishes for himself. We also pray for his success.”