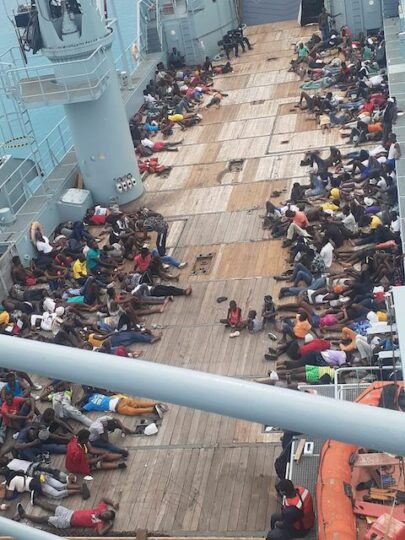 Haitian migrants onboard HMBS LAWRENCE MAJOR on the way to Inagua

Bahamian and Cuban authorities have arrested hundreds of Haitians at sea seeking to reach the United States.

They will be repatriated back to Haiti, the two countries said.

The Royal Bahamas Defence Force said it had deployed patrol vessels to the southeast Bahamas to defend against a “migrant surge” from Haiti, the poorest country in the Americas, which is grappling with a deepening humanitarian and political crisis.

Those vessels had intercepted more than 1,000 Haitians over the past ten days, said the Defence Force, posting photos this week on its Facebook page of small, crowded sailboats.

“The Royal Bahamas Defence Force is once again urging individuals to refrain from making long treacherous voyages on hazardous vessels, and in the process, risking the lives of many individuals,” it said.

Cuba’s foreign ministry said on Tuesday an unspecified number of Haitian migrants had also arrived via boat on the coasts of its eastern and central provinces in recent weeks in a bid to reach Florida.

Both Cuba and the Bahamas said they would be repatriating the migrants to Haiti.

The Royal Bahamas Defence Force said that repatriation was expected to commence on Thursday.

Earlier this month, President Luis Abinader of the Dominican Republic, which shares the Caribbean island of Hispaniola with Haiti, told the United Nations General Assembly that Haiti was “already becoming a regional problem.”

Around 30,000 Haitians arrived at the U.S.-Mexico border in recent weeks, seeking to claim asylum in the United States. U.S. authorities have expelled around 5,000 back to Haiti.

The nation of around 11 million was already facing soaring gang crime and hunger and a political crisis before the assassination of the president and a major earthquake hit over the summer.

Communist-run Cuba’s foreign ministry said on Tuesday there was a “need to work for a secure, orderly and regular migration” and said the root cause – “an unjust international order and prevailing inequality” – must first be dealt with.

The Royal Bahamas Defence Force intercepted another Haitian Sailing Vessel off Ragged Island Wednesday morning.
The Operations Communications Center at Coral Harbour Base on receipt of intelligence reports from Operations Bahamas Turks and Caicos (OPBAT), dispatched a RBDF surveillance aircraft who confirmed, shortly before 11:00 am that a Haitian sloop was seen twenty-four (24) nautical miles east of Ragged Island. HMBS LAWRENCE MAJOR and LIGNUM VITAE were directed to intercept the target of interest.
On arrival to the area, the RBDF team discovered the Haitian migrants on the vessel. One hundred and thirty-seven (137) migrants were removed from the Haitian Sailing Vessel. These individuals will be taken to Matthew Town, Inagua, to be handed over to Immigration officials for further processing.
These migrants will join the four hundred and twenty-three (423) migrants, who are currently being housed on the island. Of this total, two hundred and seventy-eight (287) are being held at a church hall and one hundred and forty-four (144) at the newly acquired warehouse.
Two hundred and ninety-two (292) migrants were also removed from Flamingo cay and adjacent cays in the Ragged Island chain on Tuesday after their vessel became disabled. These individuals are currently aboard HMBS LAWRENCE MAJOR, under the command of Lieutenant Commander Omarv Saunders.
HMBS LAWRENCE MAJOR will proceed to Matthew Town Inagua with a total of four hundred and twenty-nine (429) (one deceased) Haitian migrants onboard along with medical and food supplies and additional security detail to render assistance.
Immigration officials have confirmed that repatriation of the migrants is expected to commence Thursday 30 September.
The Royal Bahamas Defence Force has maintained a vigilant watch with patrol vessels that have been deployed to the southeast Bahamas to strengthen the Force’s posture against the migrant surge. The organization remains committed to collaborating with local and international partner agencies while protecting the territorial integrity of The Bahamas and keeping our borders secured.