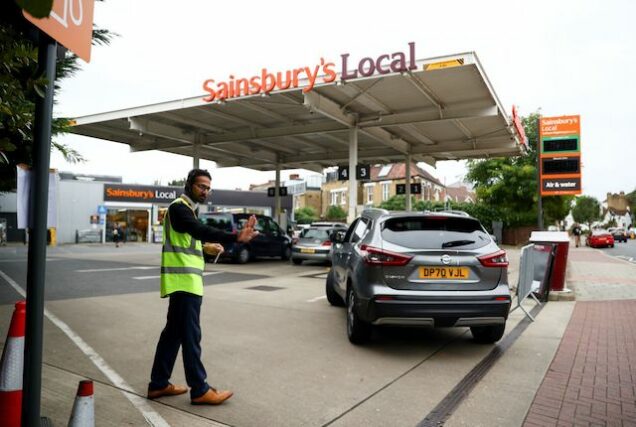 A worker guides vehicles into the forecourt as they queue to refill at a fuel station in London, Britain, Sept. 30, 2021. (Reuters photo)

Many British petrol stations were still dry on Friday after a chaotic week that saw panic buying, fights at the pumps and drivers hoarding fuel in water bottles.

These situations follow an acute shortage of truck drivers, which strained supply chains to breaking point.

Shortages of workers in the wake of Brexit and the COVID pandemic have sown disarray through some sectors of the world’s fifth-largest economy, disrupting deliveries of fuel and medicines, and even raising fears of a mass cull of livestock.

British ministers have for days insisted the crisis is abating or even over, though retailers said more than 2,000 gas stations were dry.

Queues of often irate drivers snaked back from those gas stations that were still open in London.

The Petrol Retailers Association (PRA), which represents 65 per cent of Britain’s 8,380 forecourts, said members reported on Thursday that 27 per cent of pumps were dry.

“This is running out quicker than usual due to unprecedented demand,’’ said PRA Executive Director, Gordon Balmer.

“The situation is stabilising across the country albeit there’s obviously still high demand for fuel,’’ Malthouse told Sky News.

“Let’s hope that over the next few days that eases as tanks fill.’’

After a shortage of truckers triggered panic buying at gas stations, farmers are now warning that a shortage of butchers and abattoir workers could force a mass cull of up to 150,000 pigs.

Minette Batters, president of the National Farmers Union, said a cull of up to 150,000 pigs was “potentially a week, ten days away’’. (Reuters/NAN)