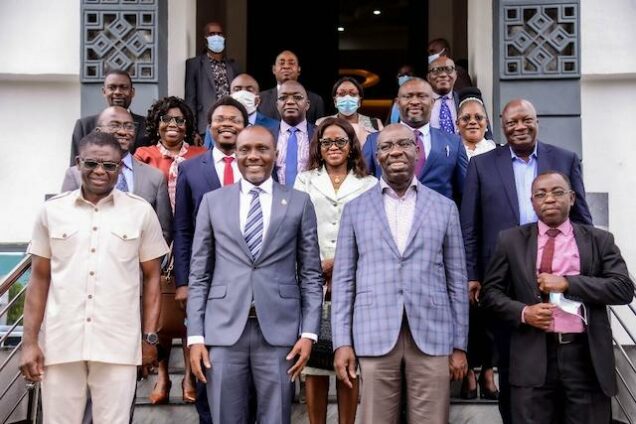 Governor Godwin Obaseki, has said that the Edo State Government has not made COVID-19 vaccination compulsory for anyone, a volte-face from his earlier posturing.

He stated this on Thursday, when he received the Chief Medical Director of the University of UBTH, Prof. Darlington Obaseki, who was on a courtesy visit to the Government House in Benin City.

In August, Obaseki said his government will enforce a policy of no-vaccination, no-entry into government-owned facilities and public places from the second week of September.

It was a measure taken to check the 3rd wave of the pandemic that was spreading like wild fire in the State.

The pronouncement drew criticism from many quarters, including civil society organizations, who dragged the Governor and four others to court.

True to the threat, civil servants who could not show proof of being vaccinated were turned back from their offices from the second week of September.

But at a meeting with CMD of UBTH in his office, the Governor harped on the need for residents to get vaccinated, which he said remains the best form of protection against the virus.

He said: “I am saddened when I see people not protecting themselves against COVID-19.

“We are not making vaccination compulsory, but for now, it is the best way to protect yourselves and protect the people around you.

“Go to any of our isolation centres and see what is happening to people,” he lamented.

The Governor disclosed that his government will sustain reforms in the healthcare system to reposition the state as the country’s medical hub.

He also assured Prof. Obaseki that the Equity Funds component of the State’s Health Insurance Scheme would be deployed to offset bills of indigent patients at UBTH.

The governor noted: “We have no choice but to support you because your success is our success. So, in terms of road rehabilitation in your hospital, we are coming straight to it; we don’t have enough but we will do it.

“I will talk to the Edo Healthcare Insurance Scheme so that we can make funds available from the equity funds to offset the bills of the poorest of the poor who cannot pay for the quality of services you have offered them.

“For us, we are grateful that we have the UBTH here in this state, as very few states can boast of such a facility. You have helped us to do things professionally; we are not afraid to put out our data; the data that we put out in Edo can stand the test of time anywhere in the world.”

He continued: “Our experience from the outbreak of coronavirus showed us that the healthcare system in Edo is one. God forbid you fall ill or you have an emergency, it won’t matter where you are treated. At that point, you don’t care if it is a federal, state, or religious institution, as long as you get cured.

UBTH CMD, Prof. Darlington Obaseki, commended the Governor for the support which the hospital management has enjoyed under his leadership.