Sanwo-Olu to Nigerians: No reason to lose hope 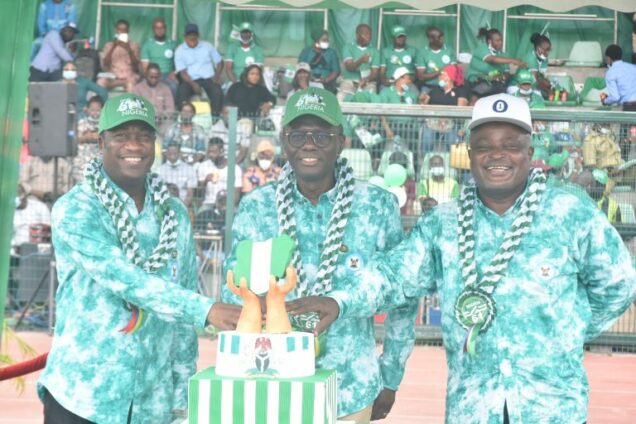 Lagos State Governor, Mr Babajide Sanwo-Olu, said there is no reason for Nigerians to lose hope in the country, even in the midst of challenges.

Sanwo-Olu said this during a programme to mark Nigeria’s 61st Independence Anniversary celebration on Friday, at the Agege Stadium, Lagos.

The governror said that as the country celebrated her independence, citizens were mindful of the various challenges confronting them as a nation and as a state.

According to him, the citizens are equally mindful of the various vistas of progress that have opened up, and which continue to give them hope that the “Nigeria of our dreams can be achieved”.

“Sixty-one years ago, the struggle of our forefathers and nationalists to free our country from the shackles of colonialism and attain the status of a sovereign and independent nation came to a happy ending with the lowering of the Union Jack and hoisting of the Green White Green Flag.

“In the years since then, so much has also happened to us as a country.

“This year marks the 22nd year since we began to enjoy uninterrupted democracy, which is itself a huge feat, considering that all previous attempts were short-lived.

“Even in the face of the many challenges confronting us as a people and as a nation, my message to every Nigerian at this time is that we have no reason to lose hope.

“There is enough evidence around us of the fact that while we are not yet where we would like to be as a country and a people, we are also no longer where we used to be,” he said.

The governor said that more than ever before, it was time for all to close ranks, and view the people’s differences not as a stumbling block but instead as an energising force.

He said that Nigerians should unite with renewed determination and commitment to move the country forward against all odds.

Sanwo-Olu said that the challenges confronting the nation within the last 61 years had no doubt been daunting, but certainly not insurmountable.

The governor said that a new mindset was required to overcome the challenges; a conviction that it was possible, and that the people’s strength was truly in their diversity.

“I am proud to affirm that Lagos State provides a perfect example within the Nigerian Nation, of the level of greatness a people of diverse ethnic, religious and cultural backgrounds can attain, if they resolve to live together in peace and harmony,” he said.

The state government on Sept. 24 held a Special Jumat Service at the Lagos State Central Community Mosque, Alausa to commemorate the country’s Independence.

Similarly, on Sept. 26, the state government held a thanksgiving service at Chapel of the Christ The Light, Ikeja to commemorate the anniversary.