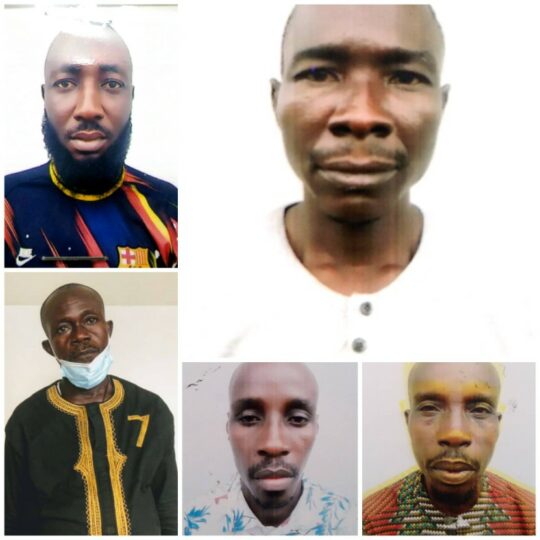 Five oil thieves have been convicted and sentenced to various terms of imprisonment in separate judgment by the Federal High Court sitting in Port Harcourt, Rivers State.

They were all jailed for illegal dealing in petroleum products.

The five convicts were jailed after pleading “guilty” to one- count separate charge bordering on illegal dealing in petroleum products, upon their arraignment by the Port Harcourt Zonal Command of the Economic and Financial Crimes Commission, EFCC.

One of the charges against the convicts read: “That you Peter Listen and Monday Nwibe on or about the 18th of January, 2020 along Port Harcourt/Eket Road, within the jurisdiction of this Honourable Court dealt in petroleum product to wit: Automotive Gas Oil (AGO) contained in 12 Jerry cans conveyed in a Volkswagen Jetta car with Registration Number RGM 787 AA and thereby committed an offence contrary to Section 1 (18) (a)(ii) of the Miscellaneous Offences Act Cap M17 of the Revised Edition (Laws of the Federation of Nigeria) Act, 2007”.

Another charge read: “That you Dahiru Danborno on the 2nd day of June 2021, within the jurisdiction of this Honorable Court did without appropriate license deal in about Forty-Five Thousand (45,000) liters of Automotive Gas Oil (AGO) and thereby committed an Offence contrary to Section 17 (a) of Miscellaneous Act CAP M17 of the Revised Edition (Laws of the Federation of Nigeria) 2007 and punishable under Section 1 (17) of the same Act”.

They all pleaded “guilty” to the one charge separately preferred against them by the EFCC.

In view of their pleas, prosecution counsel: C. Okorie, Bobby Kabiri and Endebba Abbiyesuku prayed the court to convict and sentence the defendants accordingly. However, defense counsel: Daminabo Davies Livingstone, Obinna Ofordili and David Ayuba prayed the court to temper justice with mercy stressing that they were first-time offenders.

Also, Justice Muhammed convicted and sentenced Danborno and Haruna to two years imprisonment each, with a separate option of fines.

The two Judges ordered that petroleum products arrested with the convicts be sold by the Deputy Registrar of the court, in conjunction with EFCC officials and the proceeds paid into the Consolidated Revenue Account of the Federal Government. Also, all the vehicles arrested with the convicts: Volkswagen Jetta car with Registration Number RGM 787 AA and Mercedes Truck with registration number: XL 634 UWN be returned to their owners.

The convicts’ journey to the Correctional Centre began when they were separately arrested by the anti- bunkering team of the 6 Division, Nigeria Army, Port Harcourt, Rivers State for illegal dealing in petroleum products.

They were later handed over to the EFCC for further investigation and prosecution.