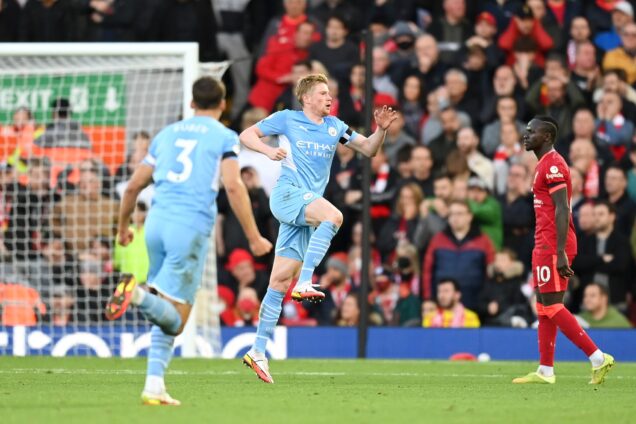 Manchester City twice came from behind to secure a draw at Liverpool in what was an enthralling Premier League encounter.

After dominating the first half, City then found ourselves behind after the break through Sadio Mane’s 59th-minute opener.

Man of the match Phil Foden then deservedly drew Pep Guardiola’s side level only for Mo Salah to strike again for the hosts with 14 minutes left.

However, a superb Kevin De Bruyne effort nine minutes from time ensured that the spoils were shared in what was a classic clash between the sides.

With a full house roaring the hosts on, City had to withstand a frenetic first 15 minutes with Liverpool enjoying the early territory and possession.

But having drawn the sting out of Jurgen Klopp’s side’s early pressure, City assumed the first half Anfield initiative.

And a moment of pure brilliance from Bernardo almost orchestrated a 20th-minute breakthrough.

The Portuguese midfielder demonstrated both strength and skill as he weaved and waltzed his way through a succession of Liverpool tackles after dispossessing Jordan Henderson before arcing an inviting through ball into the path of the recalled Phil Foden.

The England international took a touch on the left side of the box before thumping in a low shot which was blocked by Liverpool ‘keeper Alisson.

With City exploiting space down the left channel, Pep Guardiola’s side then saw an appeal for a potential penalty turned down after James Milner appeared to clip Foden as he bore in on goal.

However, both referee Paul Tierney and VAR were unmoved.

And on the stroke of halftime, only a desperate diving block from Alisson denied Foden as he drove in on goal after a stunning 80-yard assist from Ederson.

The only thing missing from a magnificent all-around first-half display was a goal and the one nagging fear was that we might regret not making that pressure tell.

As if to reinforce that concern, Liverpool tested Ederson for the first time four minutes after the restart, the City keeper alert to the task as he smothered Diogo Jota’s snap shot.

And Liverpool’s first meaningful attack saw them take the lead on 59 minutes.

Salah was the architect, the Egyptian finding a pocket of space on the right flank and his precise reverse pass put Sadio Mane in space in the box, with the Senegalese striking firing home past the Ederson.

City though produced a stunning riposte on 69 minutes through the irrepressible Foden.

Jesus was the provider, gliding across the Liverpool box before threading an inviting ball to Foden on the left side of the box.

Foden then applied a magnificent finish, rifling a low drive into the corner of the net to finally reward our attacking endeavor.

Bernardo was then upended by Milner who was already on a yellow card but referee Tierney opted to take no further action.

However, with 14 minutes left out of nothing Liverpool then regained the lead through Salah.

The Egyptian produced a fine, jinking run on the right side of the box before despatching a powerful finish past Ederson.

But this City side have character as well as class.

And that was demonstrated in emphatic fashion on 81 minutes when we drew level again through De Bruyne.

Foden was the architect once again, his cross being deflected into the path of the Belgian who struck a superb 20 yard effort that went in on-off Matip.

Rodri then produced a crucial last-ditch block to deny Fabinho from five yards after Ederson had spilled a cross and Jesus could have won it only for his shot to be blocked.

And, recalled to the starting line-up, the 21-year-old was at his incisive, mesmeric best once again on his return to Merseyside.

Deployed on the left side of our attacking trident, Foden gave former City star James Milner a tough, testing afternoon with his movement and vision a joy to behold.

Only some last-gasp heroics from Liverpool keeper Alisson prevented Foden from scoring in the first half.

But his endeavor was justly rewarded 20 minutes from time when he struck in stunning fashion.