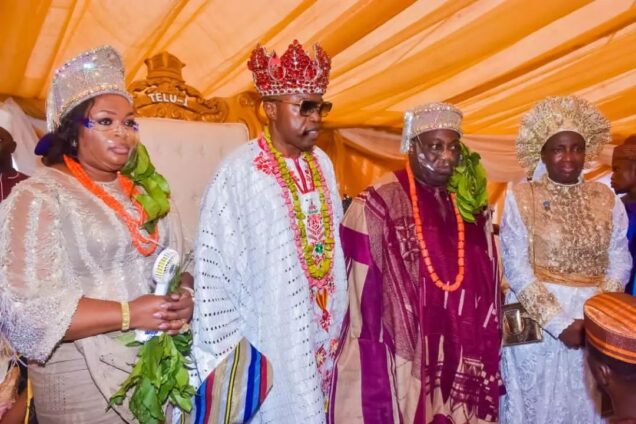 The Oluwo of Iwo, Oba Abdulrosheed Akanbi has said that God directed him to confer title of Aare Atayese on Dele Momodu, publisher of Ovation.

The Osun monarch said this on Saturday while speaking during the coronation ceremony of the media mogul at his palace.

While installing Mr. Momodu as Aare Atayese, and his wife, Mobolaji, as Yeye Aare Atayese, Oba Abdulrosheed said he got a divine instruction to honour the man, when they met three years back at a function in Bowen University, Iwo.

In a statement by Oluwo’s Chief Press Secretary, Alli Ibrahim, the monarch was quoted to have said that God told him he would need Momodu to take Iwo to a greater height.

“Dele Momodu got the Aare title in a divine, but unexplainable circumstance. I was in Bowen University for a programme and accidentally met Dele Momodu at the institution’s campus. Without premonition, I pronounced Aare. I kept pronouncing it repeatedly,” Oluwo said.

“He was surprised too. I then instructed my press secretary, Alli Ibraheem, to make a statement. I never paid attention but still wondering, why Aare? Most times, I don’t get the meaning and implication of my message immediately. Even my ardent lovers don’t comprehend instantly but the few who are deep do. God told me to confer Aare title on Dele Momodu.

“The inspiration I got convinced me to honour him free of charge. God told me I need him to take Iwoland to the Promised Land. And for the short period even before his installation, I have been seeing the impacts. The primus is the facilitation of the rehabilitation of Iwo-Ibadan Road by the Federal Ministry of Works.”

Oluwo urged the media mogul to continue working in the path of honour.