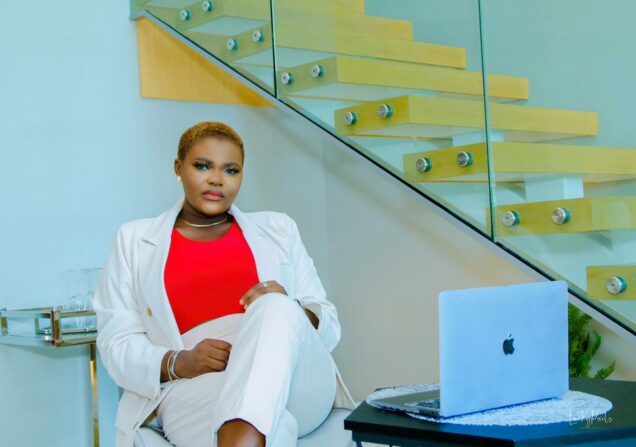 Massive resources have been invested by the Nigerian government on various campaigns to launder the image of the country abroad given the fact that many Nigerians abroad have done huge disservice to the country.

But some Nigerians have distinguished themselves in their chosen fields of endeavour, bringing laurels and accolades to the country. One of such Nigerians is Gift Preye Solomon, a woman from Edo State who has created a record in the United Arab Emirates as the first woman delivery rider.

Only recently Reebok in their Daily Fit DMX campaign with Karen Wazen profiled her as one of the women breaking boundaries in the region, by basically taking a walk in their shoes (Gift Solomon wears Reebok footwear on her daily routine)

Reebok celebrated inspiring female traile-blazers in the region and are (so-to-say) taking ‘real steps with real people.’ These ladies, in Reebok’s estimation, are making huge impacts in their own fields, which the brand backs, and their stories are even being told as they rock the Daily Fit DMX which works perfectly with their busy schedules and lifestyle.

“Coming from Nigeria, Gift’s position as a delivery rider isn’t one of convenience, but because she thought that if men could – why couldn’t she? She spends her days on the road delivering Freedom pizza across Dubai and says “there’s something about the right pair of shoes. They take you to the right places. It gives you a good start. Considering the nature of my job, it requires me to always be on my feet and always be on the move. DailyFit for me ticks all the boxes for the things I need,” the report says.

“There are some certain things that that is tagged that ladies cannot do, but then that doesn’t mean the law doesn’t allow people to do it, it’s just because ladies are not coming out to do the stuff,” she had said in an interview with Channels TV’s Dubai correspondent, Mayowa Adegoke

“My parents really struggled a lot. I and my siblings get the best (they could offer) which I as a person, I am really thankful for because, without my family (my parents), I won’t be here”, says Gift, who first arrived in Dubai in 2016.

Gift left Nigeria to work in Dubai after paying a Nigerian employment agent the sum of N450,000 to secure a job that never came.

After she eventually made it to Dubai, another agent, a Pakistani she met in the tourist city, collected 2,500 AED to get her employed. Six months later, Gift’s friend who works at Freedom Pizza encouraged her to attend a walk-in-interview.

“When I came, I was in Dubai for about six months, there was no job. Trust me, the six months were like the worst months of my life because I really had to struggle considering the cost of living; It’s on the high side. Going back home was not an option she was ready to take. I wasn’t ready to give up,” she recalled.

“I couldn’t ask my parents (for money) because I told them I already have a job”.

Her determination has now paid off. From working as a phone operator in 2016, Gift rose to the position of assistant manager just last year, when her ambition took this latest turn. She now takes pride in contributing to a new narrative within the UAE’s food delivery industry.

There are some people who think it’s not accurate for me to be a rider… Being a rider is not something I was forced into (it’s what I want to do). I know I can do it and I’m doing it, to set an example for people” she stated.

Gift Preye Solomon hails from Ese Udo local government area of Ondo State but was born and bred in Benin City in Edo State. She was born into a family of 6 children consisting of 4 boys and 2 girls. She became the eldest daughter after losing her sister shortly after death.

She had a good education but it was cut short by financial difficulties and had to cut it short. Nonetheless, she has a degree in Multimedia Networking from NIIT, Benin, Edo State. She later enrolled for a Bachelor’s degree at National Open University of Nigeria (NOUN) but dropped out at the 200 level as a result of financial incapacity.