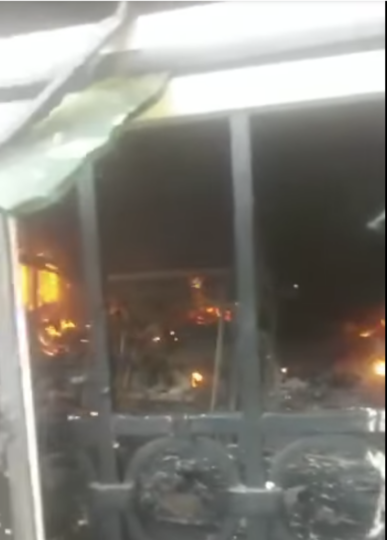 News of the arson was published on Instagram by Nwachukwu John Owen, who also posted a video of a house ablaze.

Igbokwe, a chieftain of the All Progressives Congress, APC accused IPOB of being behind the arson, in another viral post on Facebook.

In the post, Igbokwe said: IPOB invaded my house in Nnewi about now. Iam sure they raised down the my house giving the jerrycans of petrol I saw being offloaded from Sienna car via CCTV.

“To God be the glory. Iam Still alive. My Study is my greatest regret”.


Igbokwe has been an ideological opponent of IPOB and its tactics.

In a comment on Sunday, Igbokwe rebutted the statement by Senator Eyinnaya Abaribe that killers in the South east are unknown and that the security outfit set by governors are not working.

But Igbokwe replied: SENATOR ABARIBE PLEASE TAKE NOTICE THAT IAM FROM SOUTH EAST AND IAM ALSO A CRITICAL STAKEHOLDER IN THE REGION AND NIGERIA. YOU KNOW IT AND I KNOW IT ALSO THAT IPOB IS RESPONSIBLE FOR THE BLOODSHED IN THE SOUTH EAST. THIS IS THE TRUTH AND NOTHING BUT THE TRUTH. LET US FOR ONCE FEAR GOD AND SPEAK THE TRUTH SO AS TO PUT THE ENEMIES TO SHAME.

Undaunted by his loss on Sunday, Igbokwe sent a message to his IPOB attackers: BY THE GRACE OF GOD WE WILL RESCUE IGBOLAND. IT IS MY TURN TODAY TOMORROW IT MAY BE THE TURN OF ANYBODY.

“WE MUST TAKE IGBOLAND BACK FROM KILLERS AND ARSONISTS”.