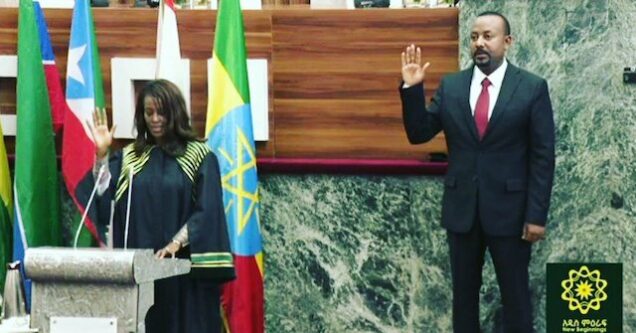 Ethiopian Prime Minister Abiy Ahmed has been sworn in for a five-year term after his election victory in June.

Abiy took the oath of office, administered by Supreme Court Chief Justice Meaza Ashenafi, on Monday after speaker and deputy speaker of the parliament’s lower house took theirs.

“I, Abiy Ahmed Ali, today in the House of People’s Representatives, accept the appointment as prime minister, as I pledge to undertake responsibly and with faith to the constitution the responsibility placed upon me by the people,” he said while being sworn in by Supreme Court Chief Justice Meaza Ashenafi.

Leaders of Ghana Djibouti, Kenya, South Sudan, Senegal, Somalia, Uganda and the Prime Minister of the Democratic Republic of Congo were also at the event.

Abiy Ahmed was first appointed as the country’s prime minister in April 2018, following the resignation of Hailemariam Desalegn.

He had served at different high-level positions, including as minister of science and technology.

Ahmed’s Prosperity Party secured more than 400 out of 436 parliamentary electoral constituencies, according to the National Electoral Board of Ethiopia.