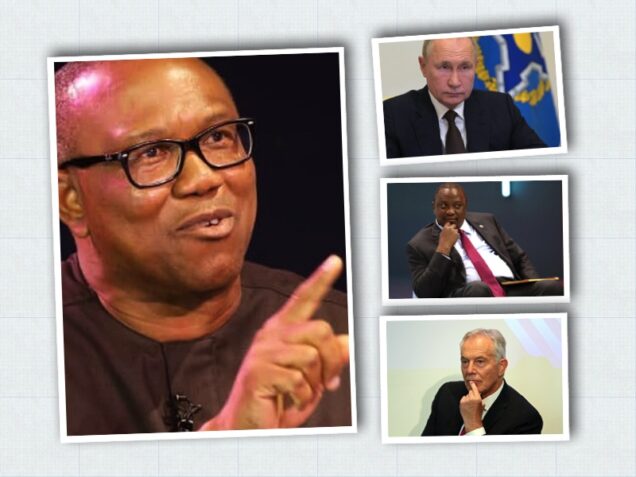 There is no hiding place for the rich and powerful as the Pandora Papers, a new leak of massive financial documents, has exposed their hidden treasures.

The Pandora Papers represent the latest – and largest in terms of data volume – in a series of major leaks of financial data that have convulsed the offshore world since 2013.

Among those exposed this time around is Kenyan President Uhuru Kenyatta, who, along with six of his family members, was revealed to own 11 offshore companies containing $30million worth of assets.

Vice Presidential candidate of the Peoples Democratic Party in 2019 election, Peter Obi was also revealed to have hidden assets in off shore companies.

The International Consortium of Investigative Journalists (ICIJ), a Washington, D.C.-based network of reporters and media organizations, said the files are linked to about 35 current and former national leaders, and more than 330 politicians and public officials in 91 countries and territories.

It did not say how the files were obtained.

According to a report by Premium Times, Obi first set up Gabriella Investment in 2010 in British Virgin Islands, which he didn’t declare in his asset form.

“Mr Obi has also now created a trust known as The Gabriella Settlement, an entity also registered in the BVI.

“According to Fidelity Investments, a trust is a fiduciary arrangement that allows a third party, or trustee, to hold assets on behalf of a beneficiary or beneficiaries. Experts believe that trusts are traditionally used for minimising taxes even though they can offer other estate plan benefits as well.

“By the current structuring of Mr Obi’s wealth and offshore businesses, The Gabriella Settlement, which appears to hold all or a majority of his assets, is the sole shareholder of PMGG Investments.

“In turn, a New Zealander entity, Granite Trust Company Limited is the sole trustee of The Gabriella Settlement. Sam Access International, the Monaco-based secrecy enabler Mr Obi first hired in 2010 to set up his offshore structure, was until August 23, 2019, the sole shareholder of Granite Trust”.

Often, they allow the true owners of opaque shell companies to be identified for the first time, reported The Guardian of UK.

The data dump of more than 11.9 million records, amounting to about 2.94 terabytes of data, came five years after the leak known as the “Panama Papers” exposed how money was hidden by the wealthy in ways that law enforcement agencies could not detect.

The files were leaked to the International Consortium of Investigative Journalists (ICIJ) in Washington.

ICIJ then shared access to the leaked data with select media partners including Nigeria’s Premium Times, the Guardian of UK, BBC Panorama, Le Monde and the Washington Post.

More than 600 journalists have sifted through the files as part of a massive global investigation.

According to the Pandora Papers, Jordan’s King Abdullah, a close ally of the United States, was alleged to have used offshore accounts to spend more than $100 million on luxury homes in the United Kingdom and the United States.

DLA Piper, a London law office representing Abdullah, told the consortium of media outlets that he had “not at any point misused public monies or made any use whatsoever of the proceeds of aid or assistance intended for public use.”

The Washington Post, which is part of the consortium, also reported on the case of Svetlana Krivonogikh, a Russian woman who it said became the owner of a £4million Monaco apartment through an offshore company incorporated on the Caribbean island of Tortola in April 2003 just weeks after she gave birth to a girl.

At the time, she was in a secret, years-long relationship with Putin, the newspaper said, citing Russian investigative outlet Proekt.

The Post said Krivonogikh, her daughter, who is now 18, and the Kremlin did not respond to requests for comment.

Since becoming friends with Putin, the former cleaner seems to have amassed a luxury portfolio of assets, including a flat in a well-to-do area of St Petersburg, other properties in Moscow and a yacht, coming to a total of $100million .

Days ahead of the Czech Republic’s Oct. 8-9 parliamentary election, the documents allegedly tied the country’s prime minister, Babis, to a secret $22 million estate in a hilltop village near Cannes, France.

Speaking during a television debate on Sunday, Babis denied any wrongdoing.

The documents also showed how Indian businessman Anil Ambani and his representatives owned at least 18 offshore companies in Jersey, British Virgin Islands and Cyprus, according to the Indian Express, part of the ICIJ consortium.

Set up between 2007 and 2010, seven of these companies have borrowed and invested at least $1.3 billion, the report said.

In 2020, following a dispute with three Chinese state-controlled banks, Ambani – the chairman of Reliance Group – had told a London court his net worth was zero.

A unnamed lawyer, on behalf of Anil Ambani, told the Express: “Our client is a tax resident of India and has made disclosures to Indian authorities as required to be made in compliance with law.

“All required considerations were taken into account when making disclosures before the London court. The Reliance Group conducts business globally and for legitimate business and regulatory requirements, companies are incorporated in different jurisdictions.”

Ambani did not immediately respond to a request from Reuters seeking comment.

Former British prime minister Mr Blair and his wife Cherie saved some $434,000 (£321,000) in stamp duty when they bought an office in London by purchasing the offshore company that owned it.

King of Jordan Abdullah II bin Al-Hussein was able to secretly add £70million worth of property to his portfolios after purchasing 15 properties in the UK and US – mainly in Malibu, California and in London and Ascot.

Azerbaijani President Ilham Aliyev and his family and close associates snapped up more than $500million (£400million) worth of property in the UK – consisting of 17 properties, including an office block in London for $44.6million (£33million) for the president’s son Heydar Aliyev, aged 11.

They also appeared to have made a $41.9million (£31million) profit after selling a London property to the Queen’s Crown Estate, which is managed by the Treasury.

Czech Prime Minister Andrej Babis – who is facing an election later this week – failed to declare an offshore investment company used to purchase two villas for $16.2million in the south of France.

Prime minister of Pakistan Imran Khan’s cabinet ministers and their families were shown to own millions of dollars worth of offshore companies.

President of Ukraine Volodymyr Zelensky was shown to have moved his stake in a secret offshore company just before his victory in the 2019 election.