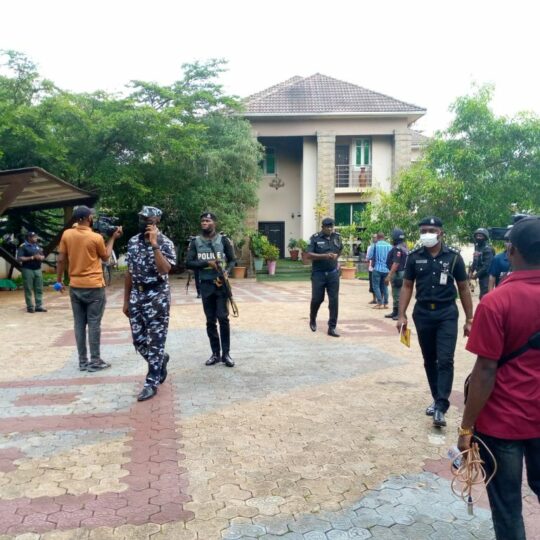 Anambra Commissioner of Police, Tony Olofu, during his visit to areas attacked by arsonists in Nnewi community on Monday

Anambra Commissioner of Police, Mr Tony Olofu, on Monday asked his officers to be resolute in resisting and taking the battle to the door step of the gunmen who have been carrying out attacks in some parts of the state.

Olofu gave the charge to police personnel in Anambra when he visited its Area Command, offices of Department of State Services and Federal Road Safety Corps, all in Nnewi which were attacked by arsonists on Sunday.

Olofu also visited the country home of Chief Joe Igbokwe, Chieftain of the All Progressives Congress (APC), and that of Mr Chu Okongwu, which were also set ablaze in Nnewi on Sunday.

The arson were attributed to a gang of rampaging gunmen aligned to separatist group, the Indigenous People of Biafra, IPOB.

The CP, who led a team of senior police officers and tactical squads on the visit, said it was part of confidence building patrol in Anambra state.

DSP Ikenga Tochukwu, Force Police Public Relations Officer of Anambra Police Command, said the CP, among other things, used the occasion to boost the morale of personnel and encouraged them to brace up for the security challenges facing the state.

“The CP, while condemning the recurring public disturbances and attacks on government facilities and private residences in Anambra state, enjoined the police personnel to be firm.

“He also called on them to be resolute in resisting and taking the battle to the door step of the perpetrators of these dastardly acts to bring them to book.

“The CP also reassures Anambra people of the command’s avowed commitment to do everything within its powers to maintain public security and safety in the state.

“He enjoined them to remain vigilant, law-abiding and assist the police and the security community with timely and credible crime prevention information,” he stated.