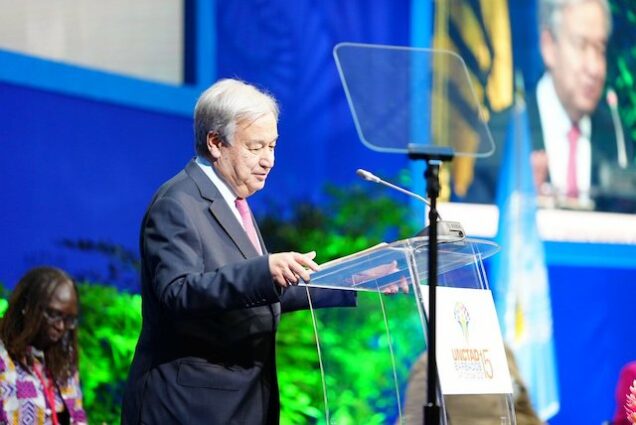 Antonio Guterres speaks at the UNCTAD conference in Barbados

U.N. Secretary-General Antonio Guterres warned on Monday that if left unchecked debt distress in the world’s most vulnerable countries would be “a dagger through the heart of global recovery” from the coronavirus pandemic.

“The international community has taken a few positive steps, but it is time for a quantum leap in support,” Guterres said, speaking at the opening of the U.N. Conference on Trade and Development(UNCTAD) in Barbados.

As of mid-2021, over half of the world’s poorest countries “are in external debt distress, or at risk of it,” World Bank President David Malpass said last week.

Guterres pushed for a substantial re-allocation of unused SDRs – “not a symbolic one” – to vulnerable countries.

He also called for G20’s Debt Service Suspension Initiative to be extended into next year and made available to all countries that need it, including middle-income countries, for a comprehensive strategy around reforming the international debt architecture and for private finance to help fill the gap.

“We know suspending debt payments will not be enough in many countries. They will need effective debt relief, involving both public and private creditors,” Guterres said.

“It is deeply unfair that rich countries can borrow cheaply and spend their way to recovery – while low- and middle-income countries struggle to keep their economies afloat,” he said.

I want to thank Prime Minister Mottley and all Barbadians for so warmly welcoming us and in particular, I will never forget, the wonderful day that Prime Minister Mottley gave me yesterday, showing me the enormous effort that her government is making in order to make sure that Barbados is able to defeat COVID, to defeat climate change, and to defeat inequality in the world.

And I also would like to thank everyone who is part of the UN Conference on Trade and Development.

A gathering like this comes only once every four years.

UNCTAD 15 is the Olympics of trade, development, investment, policy and technology discussions.

And we need your advice and guidance today, more than ever.

Two weeks ago, at the UN General Assembly, I had the opportunity to sound the alarm.

A wake-up call to the leaders of the world.

A call to action to tackle the cascade of crises facing us.

And of course, the COVID-19 pandemic, which has claimed almost five million lives so far.

The pandemic has wreaked havoc across the global economy.

It disrupted the powerful economic engines of trade, manufacturing and transportation.

Millions of jobs have been lost at a time when social protections remain out of reach.

Tens of millions of children remain out of school — particularly girls.

And for the first time in two decades, the human development index has declined.

We’re moving in the wrong direction.

Decades of hard-won development progress are slipping away before our eyes.

And the Sustainable Development Goals are at risk of failure.

We need to turn this around with a bold, sustainable and inclusive global recovery.

One that benefits the many, rather than the few.

One that delivers hope to people — and healing to our planet.

And one that levels the playing field for all countries as they support their people during this extraordinary moment in history.

There is seemingly good news. Some estimates show that we’re in the midst of a substantial economic recovery — with world GDP growth ranging between five and nearly six per cent.

But we know the other side of that story. This recovery is not evenly shared.

Advanced economies are investing nearly 28 per cent of their GDPs into economic recovery.

For middle-income countries, that falls to 6.5 per cent.

And it plummets to 1.8 per cent for the least-developed countries. 1.8 per cent of a very small gross domestic product.

In all, more than eight out of every ten dollars in recovery investment is being spent in developed countries — not in the countries in greatest need.

Dear friends — an uneven recovery is leaving much of humanity behind.

And until we get serious about vaccine equity, recovery will be stuck at the starting gate.

Yet more than 90 per cent of Africans have yet to receive their first dose.

This is an outrage.

And as variants take hold and spread, this is a recipe for disaster, threatening us all.

As I have said repeatedly, the world must mobilize behind a global vaccination plan with clear targets for every country.

We need to dramatically ramp-up vaccine production and get them into the arms of 70 per cent of people, in all countries, in the first half of 2022.

But vaccines are the first step in a much longer race.

Your theme this year — “From inequality and vulnerability to prosperity for all” — captures the heart of the challenge.

I see four glaring challenges, which — if not addressed — make any notion of prosperity for all a distant dream.

The first challenge is the imperative to tackle debt distress.

Left unchecked, debt distress is a dagger through the heart of global recovery.
Countries cannot build back if they are held back.

The international community has taken a few positive steps, but it is time for a quantum leap in support.

That is why today at UNCTAD 15, I am proposing an urgent four-point debt crisis action plan.

To start — we know national budgets are being stretched thin by COVID-19, so we must push for an immediate expansion of liquidity for the countries in greatest need.

I welcome the recent issuance of $650 billion in Special Drawing Rights by the International Monetary Fund.

But this support largely goes to the countries that need them least, as they are distributed according to the quotas.

Second — we know countries are being crushed by debt service costs, so we need an extension and expansion of the G20’s Debt Service Suspension Initiative into next year.

The Initiative — and the Common Framework for Debt Treatment Beyond the DSSI — have great potential to ease the debt crisis.

But they are too limited in eligibility and timeframe.

Suspending debt service should be extended into next year and also made available to all countries that need it, including middle-income countries.

Third — we know suspending debt payments will not be enough in many countries. They will need effective debt relief, involving both public and private creditors.

I renew my call for a comprehensive strategy around reforming the international debt architecture — including debt restructuring or reduction, especially for middle-income countries — to help them avoid deadly cycles of debt waves.

We should look at innovative debt instruments like debt swaps, buybacks and exchanges.

Fourth and finally — we need private finance to help fill the gap.
It is deeply unfair that rich countries can borrow cheaply and spend their way to recovery — while low- and middle-income countries struggle to keep their economies afloat.

We need to bring together the public and private sectors to develop innovative financing tools to accelerate the return of private investment to pre-pandemic levels — which will, in turn, accelerate recovery.

And we need to increase multilateral development bank assistance to lower risk and draw capital to bankable, job-creating projects in communities that need them.

Taken together, this debt crisis action plan can help ensure that no government is forced to choose between servicing its debts and serving its people.