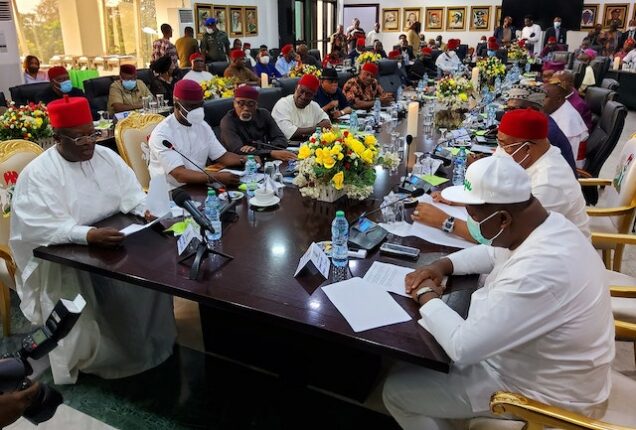 Gov. Willie Obiano of Anambra was conspicuously absent at a meeting in Enugu today where his colleagues in the region resolved to free it from the stranglehold of the outlawed Indigenous Peoples of Biafra (IPOB).

Obiano’s Anambra state, theatre of many cases of violence staged by militants linked to IPOB, was also not represented.

In his absence, his colleagues declared that they would do everything to end the “sit-at-home’’ order imposed by IPOB.

The governors made the declaration in a communiqué issued at the end of their meeting with stakeholders.

The meeting was convened by the Ebonyi governor, Dave Umahi and hosted by Gov. Ifeanyi Ugwuanyi of Enugu State.

Gov. Umahi said the governors were worried by the spate of insecurity in the region and condemned the continued “sit-at-home’’ order.

He assured that the regional security outfit put together by states in the region, “Ebubeagu’’, would be launched to give it teeth and laws passed in all the states to that effect before end of 2021.

“The governors and leaders of the southeast condemn killings in the region and have agreed to join hands with security agencies to stop the trend.

“We as well condemn the “sit-at-home’’ order by IPOB issued mostly by our people in the diaspora who do not feel the pains.

“The meeting resolved that governors and people of the southeast will do everything within the law to ensure that there is no further sit-at-home and people are allowed to move about freely,’’ Umahi said.

The governor said the meeting received a report from Ohanaeze Ndigbo, the flagship socio-cultural organisation in the region, on various matters affecting the southeast, especially on security and marginalisation.

He stressed that the governors would study the report for immediate implementation and engagement with the Federal Government for amicable settlement of issues agitating the minds of the people, especially the youths.

“The meeting agreed to support security agencies to restore peace in the southeast as well as to support the Nov. 6 governorship election in Anambra to ensure a peaceful process.

“We commend all groups and the clergy for their efforts at interfacing with our youths,’’ he stressed.

The meeting also mandated clergymen, the Christian Association of Nigeria, Ohanaeze and traditional rulers to continue to dialogue with youths in the region.

Governors of Ebonyi, Imo and Enugu states and the deputy governor of Abia attended the meeting.