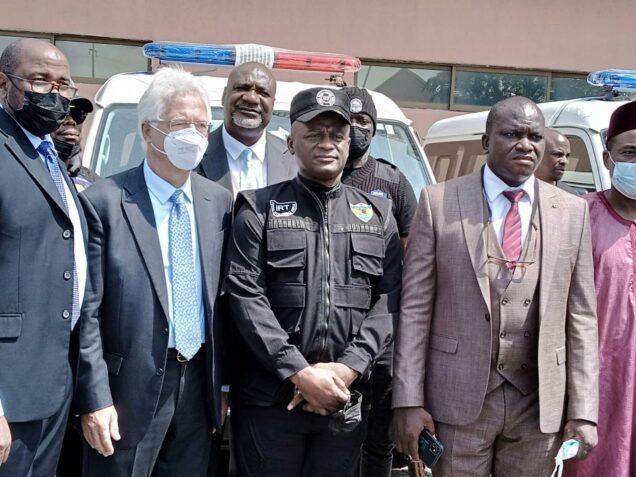 Disu, who represents the IGP and others at the event

The Inspector General of Police, Usman Alkali Baba on Tuesday vowed to intensify security of lives and property nationwide and decisively deal with emerging threats to guarantee peace and development.

The IGP spoke in Lagos through the Head of Police Intelligence Response Team (IRT), DCP Olatunji Disu while receiving vehicles donated by the German government in furtherance of the bid to rev up the security architecture of the country.

Speaking at the event held at Germaine Auto Centre, 4th Roundabout, Lekki-Epe Expressway, Disu commended the German government for the gesture, assuring that the vehicles would be put to good use to protect lives and property of the people.

“On behalf of the Inspector General of Police, Alkali Usman Baba, we thank the German government for extending their hand of fellowship to us towards crime prevention in Nigeria.

“Let me also seize this opportunity to assure you that the vehicles will be put to good use for the protection of lives and properties of the citizens of the country,” Disu said.

Earlier, the Consulate General of the Federal Republic of Germany in Lagos, Herbet Maassen said the presentation of the vehicles was in line with the commitment of the German government to contribute positively to foreign countries.

“The presentation of the vehicles is our own way of contributing towards assisting the Nigerian security agencies to maintain peace and security in Nigeria. We will continue to do more as the situation requires,” he said.

Aside the IRT of the Police that got two Toyota Hiace Buses, other agencies that benefited include the Department of State Security (DSS), Economic and Financial Crimes Commission (EFCC), National Drug Law Enforcement Agency (NDLEA), National Agency for the Prohibition of Trafficking in Persons (NAPTIP), among others.