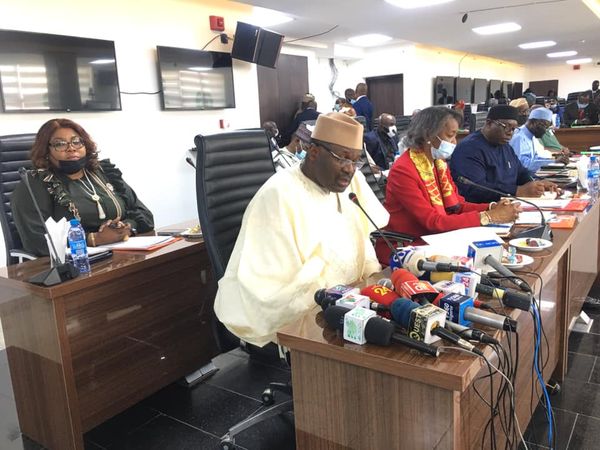 The Independent National Electoral Commission said it is forging ahead with preparations for the 6 November governorship election in Anambra despite security threats by militants, believed to be linked with the Indigenous People of Biafra (IPOB).

INEC chairman, Professor Mahmood Yakubu stated the resolve of the commission at an emergency meeting in Abuja of the inter-agency consultative committee on election security (ICCES).

“We wish to assure the people of Anambra State that the Commission is determined to proceed with the election as scheduled”, Yakubu said.

“To underscore this determination, the Commission is implementing two more activities on the Timetable for the election in the next few days.

“The register of voters will be presented to political parties in Awka on Thursday 7th October 2021.

“On the same day, the Commission will publish the final list of candidates for the election”.

Yakubu recalled the arson attack on INEC office in Awka and said the commission has almost completed the repairs of the building, while it has also replaced the materials destroyed.

The INEC chairman said the security situation in the state had deteriorated since the last meeting of the committee.

He expressed fears not only that INEC facilities could be targeted again, but also that election personnel made up of NYSC members could become targets.

“The Commission is particularly concerned about the safety of voters and Election Day staff, including security officials who have also become the targets of these attacks.

“The thousands of young Nigerians that we intend to deploy for the election, most of them National Youth Service Corps (NYSC) members and university students, need to be reassured of their personal safety. At the same time, deployment for the election will involve the movement of huge consignments of sensitive and non-sensitive materials to the 21 Local Government Areas of the State, 326 Wards or Registration Areas and 5,720 Polling Units.

“That means over 6,000 locations to be protected. If we add that to about 26,000 officials that will be deployed for the election, we begin to appreciate the magnitude of the challenge of securing the Anambra Governorship election which is only thirty-two (32) days from today.

“Perhaps never before in our history has the importance of election security in a Governorship election been this urgent. The Commission is aware that this is by no means an easy task.

“We appreciate the enormous challenges that the security agencies are presently facing in Anambra State, which entail not only securing the electoral process, but also enforcing law and order generally. This is particularly worrisome because the security agencies have also become prime targets of these mindless attacks.

Yakubu said the emergency meeting was called to review and take action on the security situation in Anambra.

He said the commission “will continue to work with the security agencies and in consultation with respected opinion leaders in Anambra State and the National Peace Committee to ensure that these hit-and-run attacks do not derail the electoral process”.