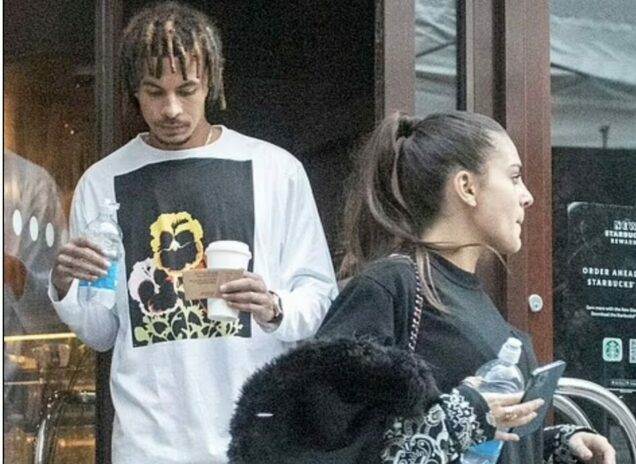 The romance appears to be going strong after they were spotted Monday on a romantic lunch at Novikov Restaurant and Bar in Berkeley Street, Mayfair.

They were later seen together going for coffee at nearby Starbucks.

Photographs showed Maria leading the way as she and Dele carried takeaway coffees at the Starbucks.

In May, the 25 year-old Spurs midfielder was seen kissing Maria at a London rooftop bar in May, reports Mail Online.

The luxury West End venue is a popular hotspot with the celebs and Premier League footballers, with the likes of Justin Bieber, Anthony Joshua, Drake and Novak Djokovic all regulars.

Afterwards Dele, whose career at Spurs is rumoured to be hanging in the balance, then got into a waiting car with Maria and were swept away, a witness said.

Their apparent burgeoning relationship emerged months after Dele was left ‘gutted’ over his split from his model girlfriend of five years, Ruby Mae, in February.

It was claimed that Dele and Maria met in April and that they ‘didn’t care who saw them’ as they kissed in front of a DJ booth at Cloud 9 bar.

An ‘onlooker’ told The Sun: ‘Dele and Maria didn’t seem to have a care in the world. They didn’t mind who saw them as they smooched in front of the DJ booth.

‘It was packed with hundreds of revellers watching on. All the tables had been booked and were completely full. Strangers were wandering past and Dele and Maria didn’t blink an eye.’

They added that the duo looked ‘so cute’ and could have passed for ‘honeymooners’.

However, Maria is said to have told friends that she is ‘just friends’ with Dele despite their reported kiss.

She lives in London, where she is studying, and has a huge following on Instagram.

Guardiola has three children – Maria, 20, Marius, 18, and Valentina, 13, with his wife Cristina Serra.