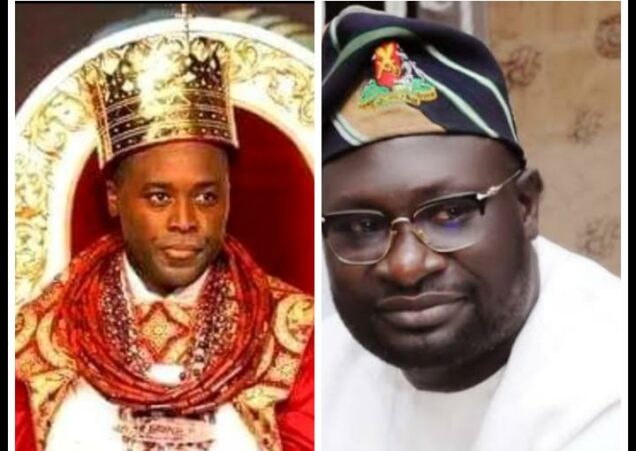 In Warri kingdom on Tuesday, 5 October, the Olu of Warri, Oba Tsola Emiko, Ogiame Atuwashe III, wielded his royal axe. It landed on the neck of Emami Ayiri. The consequence was that the monarch stripped Ayiri of his Ologbotsere (Prime Minister) title.

Before then, the Ologbosere had been on suspension and not a few in Warri and outside believed that it was a matter of time that the Olu would wield his royal scimitar against the kingdom’s prime minister.

Ayiri’s sins were two. First, he reportedly tore into shreds the nomination paper (of Emiko) presented to him by the kingmakers. This was considered a great affront to the kingmakers and Emiko himself who kept his anger to himself.

Secondly, Ayiri, to prove that he was not mad when he tore the nomination paper, made a beeline for the court to challenge the Thursday 27 May 2021 press conference announcement of the date of installation of Emiko as the next Olu. That announcement was made by the Iyatsere of Warri Kingdom and acting Chairman of the Olu’s Advisory Council, Chief Johnson Amatserunleghe. The Iyatsere told journalists that the formal proclamation of Emiko as the successor to the throne was made at Ode-Itsekiri on 5 April 2021, the same day the passage of his predecessor, Ogiame Ikenwoli, was announced. According to Iyatsere, Emiko’s emergence came “after a rigorous process, which included a painstaking search within and among the descendants of the last three Olus as required by tradition, custom and extant laws.”

Ayiri, the Ologbosere, would have none of that! He headed for a Warri High Court, seeking legal interpretation of the amended 1979 Olu of Warri Chieftaincy Edict which, according to a Punch report, says that the Olu must have Benin and Warri blood flowing in him. Emiko’s mother is Yoruba: Olori Gladys Emiko (wife of Olu Atuwatse II, Emiko’s father).

Ayiri sought the court’s order of an interlocutory injunction to “restrain the defendants either by themselves, agents, privies and/or whomsoever from crowning any person as the Olu of Warri Kingdom, pending the hearing and determination of the suit.

The Ologbotsere wanted “an order restraining the defendants either by themselves, agents, privies and (or) by whomsoever from using anybody, particularly the third defendant (Iyatsere) or the Uwangue or any other traditional chief of Warri Kingdom to crown any person as the Olu of Warri Kingdom against the provision of the Traditional Rulers and Chiefs  Edict of 1979, pending the hearing and determination of this suit”.

He was also seeking the court to “upturn the purported suspension of Ologbotsere as the Chairman, Olu Advisory Council and Traditional Council of Chiefs by the Ginuwa I Ruling House.”