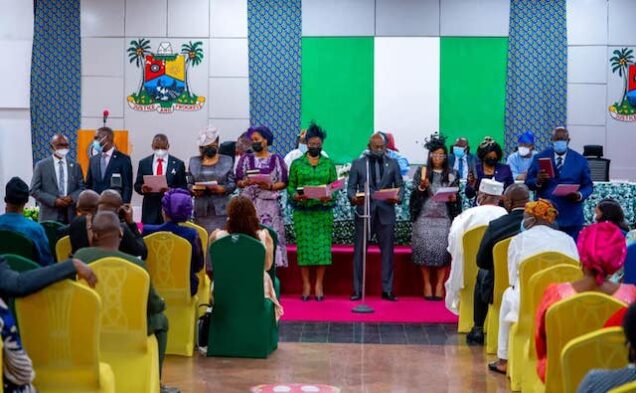 The new Lagos permsecs taking the oath of office

Lagos State Governor, Mr Babajide Sanwo-Olu, has urged the newly appointed Permanent Secretaries to reciprocate the trust reposed in them.

Sanwo-Olu said he expected the new appointees to give their best in providing quality service delivery in the discharge of their duties and responsibilities to Lagosians.

At the swearing-in of the Permanent Secretaries at the Lagos House Ikeja on Wednesday, the Governor said his administration remains committed to its THEMES agenda.

He said the agenda is driving the government toward achieving its “Greater Lagos” goal.

According to Sanwo-Olu, the new Permanent Secretaries merited the elevation, based on their track record.

Mr Sunday Jokotola who is the Permanent Secretary and Tutor General (Education District Four), thanked the Governor for the confidence reposed in them.

Jokotola said the new appointees will key into the THEMES agenda and perform their duties according to the law.

Mr Sikiru Salami, Auditor-General and Mr Obafemi Ogunlana, Auditor-General for Local Government were both sworn-in in acting capacities until their confirmation by the State House of Assembly.