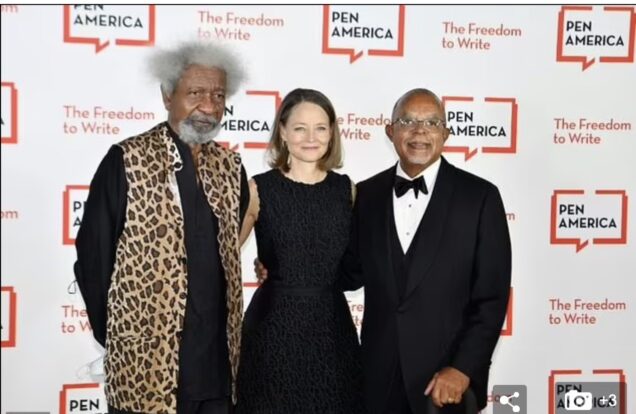 The Iranians “are three celebrated writers who have been imprisoned by the Iranian authorities for their writing, their defense of free expression, and their peaceful opposition to state censorship,” PEN America said.

The trio is serving a combined 15 and a half years in prison for their involvement with the Iranian Writers Association (IWA), an anti-censorship group.

PEN paid tribute to them at a star-studded gala in the dramatic setting of New York’s American Museum of Natural History among dinosaur skeletons and beneath a huge replica of a blue whale, after last year’s event was held virtually because of the Covid-19 pandemic.

“We confer the PEN/Barbey Freedom to Write Award on writers whose courage prompts us to renew our collective vow to defend free societies,” PEN CEO Suzanne Nossel said.

Playwright Lynn Nottage read a letter from the three dissidents, who wrote that they think of the many people persecuted in Iran and around the world.

“Your award belongs to all of them,” they said.

Abtin, a poet and screenwriter, novelist and journalist Bajan, and Mahabadi, an author and literary critic, have been imprisoned in Tehran’s notorious Evin prison since September last year.

Abtin and Mahabadi contracted coronavirus there and have not received proper hospital treatment for other ailments, according to PEN.

The three men were jailed “on spurious national security and propaganda charges connected to their activities with the Iranian Writers Association,” PEN America said.

A letter addressed to ultra-conservative Iranian President Ebrahim Raisi asking for their release has been signed by nearly 370 artists and intellectuals, including Canadian author Margaret Atwood, Nobel Prize-winning writers JM Coetzee of South Africa and Turkey’s Orhan Pamuk, as well as US actors Meryl Streep and Alec Baldwin.

The hundreds of guests who attended the gala, which is typically the highlight of New York’s literary calendar, were required to show proof of vaccination and a negative Covid test.

The event is the latest New York cultural highlight to return following the pandemic after last month’s Met Gala.