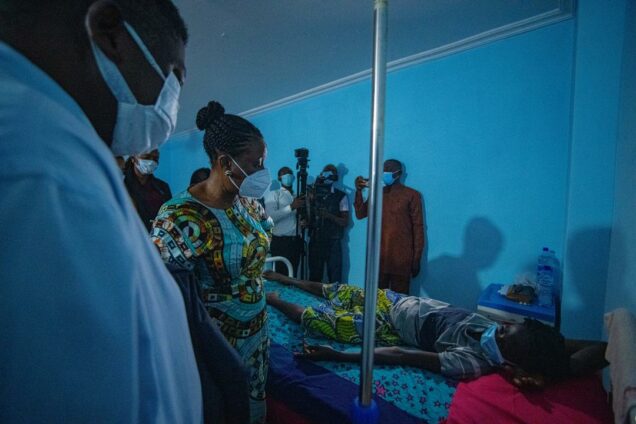 Mrs Obaseki when she visited patients who were registered for surgery at the Stella Obasanjo Hospital, in Benin on Wednesday: She directed that surgeries should be carried out in the VVF Centre she set up at the hospital.

Wife of Edo Governor, Mrs. Betsy Obaseki, has directed the commencement of free surgeries for women suffering from Vesico-vaginal fistula, VVF and Recto-Vaginal fistula (RVF) in the state as part of her Maternal and Child Health Initiative.

Mrs. Obaseki who gave the directive on Wednesday, when she visited patients who were registered for surgery at the Stella Obasanjo Hospital, in Benin, directed that the free surgeries be carried out in the VVF Centre she set up at the Hospital.

Women from States surrounding Edo will also benefit from the free surgeries and rehabilitation, according to Obaseki.

The Edo First Lady advised women not to avoid caesarean sections at child birth when prescribed by medical experts, adding that other options could result in fatal risks or result in a life of poor health stigma.

She disclosed that she decided on the gesture due to reports that Nigeria accounts for 40% of the global burden of the condition in the world.

Vesicovaginal fistula VVF or Rectovaginal Fistula RVF is a condition of feminine urinary or fecal incontinence resulting from multiple causes.

However, the most common cause in Nigeria is prolonged labour due to large fetal size, exceeding the capacity of the mother’s uterus.

Surgical errors are also a popular cause of the physical anomaly.

Obaseki’s free surgery initiative is ongoing and persons desiring the service are invited to signify by registering at any major public hospital within the State.

Prof. Adeoye noted that stigmatizing condition subtracts from the dignity and self-esteem of the woman.

According to him, “You can imagine woman leaking urine and feces. It takes a lot from her. So, this surgery is actually not just to repair the woman, but also to give her life back to her so she can go back and relate with her peers in the community and contribute her own quota to the development of her family and the society at large.”

Beneficiaries of the Mrs Obaseki’s initiative said the free surgery will restore their social lives.

Mrs Beauty Famous said: “I started suffering this condition after giving birth last year, and since then it has been difficult to go to church and social events as I can’t stay for long. Doctors said the surgery will cost four hundred thousand naira, which I don’t have and I thank the First lady for deciding to help us.”

On her part, Mrs Edith Esan said: “I started suffering this condition after a fibroid surgery. May God continue to bless our First Lady for this.”