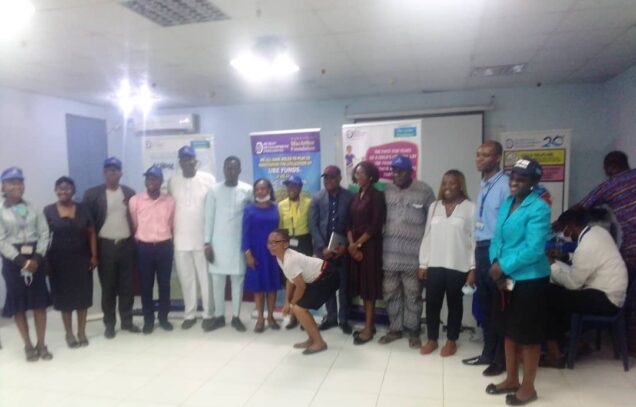 The meeting, which took place at 2, Iwaya road, Onike, Yaba, Lagos, centered on how to find a lasting solution to the problems of out-of-school children.

At the meeting, anchored by Mrs. Bolanle Dare – Senior Program Officer of HDI, the ​CSOs and journalists agreed that the government had achieved some success but more needs to be done to monitor the utilization of the Universal Basic Education (UBE) funds and also to reduce the number of out-of-school children in Lagos.

The civil society organizations and journalists, however, deliberated on some of the challenges encountered in areas of monitoring and factors influencing the rate of out-of-school children.

One of the challenges noted at the meeting was the “Accessibility” to schools.

The CSOs and journalists agreed that it has been difficult to access schools in order to monitor the utilization of the Universal Basic Education (UBE) funds and developmental projects.

It was noted that some managements of government-owned schools shun the requests of journalists to access schools to document what has been achieved and areas of loopholes that need to be made public.

One of the journalists who spoke at the event, Yemisi Edun, narrated how she was attacked for taking pictures from a school with no drainage system – which affected the accessibility to the school for pupils during rainy seasons.

Accessibility to schools for children living in riverine areas was also noted as one of the factors influencing the rate of out-of-school children.

Another challenge noted to have been responsible for the rate of out-of-school children was that many parents do not know the right offices to approach in order to get their wards to government-owned schools.

Corruption in the admission processes to government-owned schools was also linked to the rate of out-of-school children in Lagos.

It was noted that some schools demand more than the required fee needed for the enrollment of a child.

It was also agreed at the meeting that the duration for the admission processes needed to be evaluated in order to enable the enrollment of more pupils.

Inadequate data, to monitor enrollment and other development projects, was also listed as one of the challenges that must be tackled to ensure all child gets educated.

However, after listing the challenges, HDI vowed to continue to sensitize parents on how to ensure their children get easy and affordable access to schools in Lagos.

Mrs. Bolanle Dare noted that the organization will also work on models that will make it easy for journalists and school management to work together.

She noted that the role of HDI is not to attack the government or its officials but to ensure that the future of the children are secured through proper education.

Bolanle added that there’s a need for more transparency on the part of government officials and the Lagos community to ensure that the right processes are followed in building the future of children.

She noted that all matters raised will be properly addressed in order to ensure that more children get access to free and quality education.