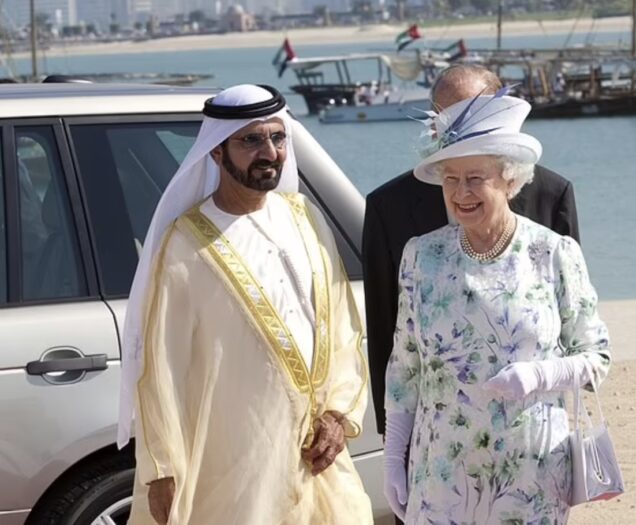 Sheikh Maktoum and Queen Elizabeth many years back in Dubai

Queen Elizabeth has disinvited Dubai ruler Sheikh Mohammed bin Rashid Al Maktoum to the Royal Box at Ascot next week, according to reports.

This followed the verdict by a London judge that the Sheikh ordered phone hacking of his ex-wife and a Tory peer, her lawyer.

The Mail Online reports that the 72-year-old Dubai ruler will not be back in the prestigious spot alongside the Queen at the races.

Sheikh Maktoum had for many years been a guest of the Queen.

The paper said a decision has been made by Buckingham Palace to distance the Royal head from him following the scandal.

A senior judge Sir Andrew McFarlane found Sheikh Maktoum committed a ‘total abuse of trust and indeed an abuse of power’ by ordering the hacking of the iphone of his ex-wife Princess Haya and her lawyer, Baroness Shackleton, a Tory peer.

Four other associates of Haya, including another lawyer were hacked as well.

Fiona Shackleton was reported to have been tipped off about the hacking by Cherie Blair, who works with the Israeli NSO Group.

Haya’s phone was found to have been hacked 11 times in July and August last year with Sheikh Mohammed’s “express or implied authority”.