BBNaija: Whitemoney and I have a bromance - Pere 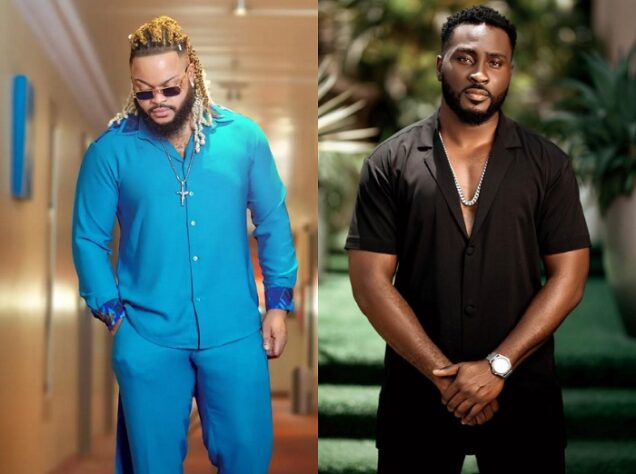 Former Big Brother Naija Shine Ya Eye housemates Pere and Whitemoney have both confirmed that they are now friends and have a budding relationship.

The Big Brother Naija Shine Ya Eye show officially came to an end on Sunday, October 3, 2021, while its sister show on Showmax, The Buzz, also drew the curtains close on Wednesday, October 6, 2021.

The Buzz’s finale was a show special that had the top 6 and Ebuka Obi-Uchendu sit down for discussions about the season with host, Toke Makinwa.

In one of the sessions with Toke, Whitemoney and Pere confirmed that they were now friends and their budding relationship wasn’t just a game in the house.

Toke asked Pere and Whitemoney, “Both of you – Whitemoney, Pere, bromance, real relationship or just for the show?” Pere immediately replied her saying, “Bromance, man.”

Whitemoney also added, “we are cool”, as Toke continued to push to get the truth.

Liquorose also interjected that she absolutely believed both men were genuinely good with each other.

That question didn’t come as a surprise as Whitemoney and Pere had a tumultuous relationship during the show.

Whitemoney was the only person to discover that Pere was a wildcard at the beginning of the show. This led Pere to believe that Whitemoney had an informant in BBNaija and caused him to distrust the 29-year-old.

And then Pere also discovered Whitemoney’s strategy and tried to foil it by throwing a wrench in his plans. They had several altercations afterwards, most small, a few – loud.

As the show came closer to the end, both men put their differences aside and became friends.

In a world where we want more love and peace over hate, this is one of the best things to come out of the show this season.

Even though Whitemoney won this season by 47% ahead of Liquorose’s 22.99% and Pere’s 14.77% and the General was right about his strategy all along, Pere still maintains that he is happy for Whitemoney.

He told Toke on the show, “it was amazing. I’m happy for him. It’s a great feat for him, so I’m excited for him. I congratulated him that night. I was excited and jumped up with him”.

Pere and Whitemoney will hopefully get to work on other projects together soon until we watch them again at the reunion.

Since The Buzz and BBNaija are now over, make sure to check out more reality series and other shows you can watch on Showmax.

Download the Showmax app on your iOS or Android device for the exclusive episode from the BBNaija’ Shine Ya Eye’ edition.