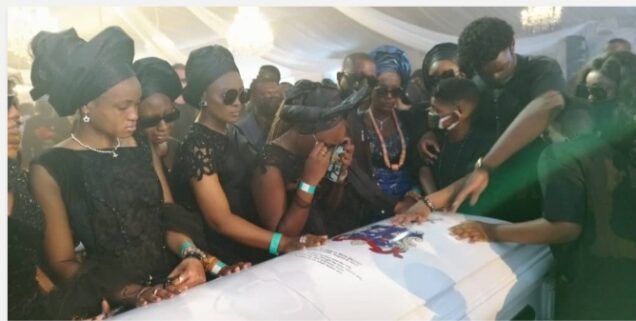 Hundreds of people from all walks of life converged in Benin on Friday to bid farewell to the late business magnate, Captain Idahosa Wells Okunbo, as he was laid to rest.

Governor Godwin Obaseki of Edo State, his Lagos, Ogun and Kebbi State counterparts, Babajide Sanwo-Olu, Dapo Abiodun and Abubakar Atiku Bagudu respectively, were on hand to pay tribute to the late philanthropist at the funeral service.

In his tribute, Obaseki described the deceased who was better known as Captain Hosa, as a genius bridge builder, business tycoon and philanthropist extraordinaire.

According to him, Captain Hosa was “a man who was determined to surmount world challenges. He pushed himself to the limit to achieve greatness, building an impressive business empire and transforming the lives of numerous people, most of them of Edo origin.”

Obaseki continued: “Late Captain Okunbo was a trained pilot who mastered the air early in life and set for the land and the maritime sector, prevailing in all spheres. Captain Okunbo was an embodiment of hard work, perseverance, dexterity and acumen, which espoused his Edo heritage.

“Captain Hosa was a philanthropist who gave lavishly of himself and his resources. He will be remembered for his dying love for Edo people. His desires for the development and progress of our dear State, the Niger-Delta region and Nigeria, as well as his valuable contributions to building bridges across the country, must never be forgotten.

“In building a diverse business empire that spans maritime, transportation, logistics, agriculture, hospitality, and security, he displayed rare business acumen, providing employment for thousands of Nigerians and contributing greatly to the development of the nation.”

In his sermon titled, ‘Life is a mystery’, Apostle Ekwueme Goodheart Obi noted that life is a precious gift from God that “we will render an account for how we use it.

“We all that are alive are indebted to God as no one owns his or her life. Life is a gift as we would render stewardship one day on how we used the life given unto us all. Life is like a vapour; we have to be careful about life.”

In her eulogy, Olori Ivie Atuwatse, wife of the Olu of Warri, Atuwatse III and first daughter of late Captain Hosa, described her late father as a man with many parts and purposes.

“My father was a great man. He lived in service to humanity. My father worked on purpose and in doing so, encouraged others to find their parts and purpose in life,” she said.

Captain Hosa died of cancer-related disease at the age of 62.