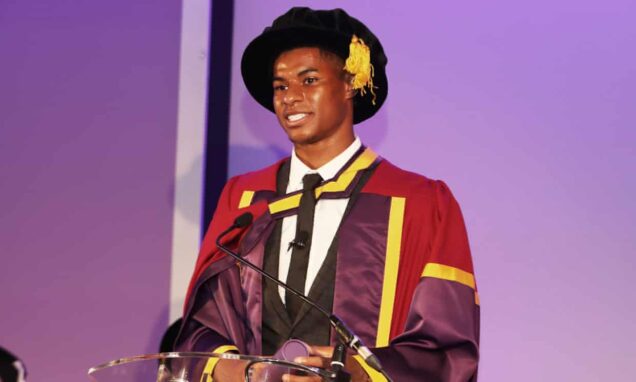 Marcus Rashford MBE is the youngest recipient of an honorary doctorate from Manchester University, which he received at a special ceremony which took place at Old Trafford. Photograph: University of Manchester

Marcus Rashford has received an honorary degree from the University of Manchester for tackling child poverty.

The achievement made the 23-year-old the youngest recipient of an honorary doctorate from the university.

However, Rashford described it as “bittersweet” as he received the degree a day after the £20 Universal Credit uplift was cut.

The £20-a-week increase to Universal Credit was originally introduced to support people on low incomes during the pandemic.

The government has insisted it was only ever meant to be a temporary measure but has come under fire for removing it at a time when many are struggling with the rising cost of living.

Rashford, while speaking at the University of Manchester ceremony at Old Trafford, said the cut meant “millions of families across the UK lost a lifeline”.

He then used his speech at the ceremony to urge politicians to get “out into communities” like his hometown of Wythenshawe in South Manchester.

He said: “Yesterday, millions of families across the UK lost a lifeline and a means of staying afloat – a move that could see child poverty rise to one in three children. For that reason, today is bittersweet.

“It’s time that representatives got out into communities like mine.

“It’s time they saw first-hand the true measure of struggle. Covid-19 can no longer be used as an excuse.”

Speaking to the BBC, Mr. Rashford said the situation many now found themselves in “reminds me of… when I was younger”.

“These are decisions that you don’t want people to go through, never mind children.

“And there’s other stuff, the price of fuel and electricity and there’s actually a shortage of food at the moment… as some of the food banks I work with are experiencing.

“So there’s other things that people are worrying about and, if we can take one less stress off them, it’s important.”

Former United manager Sir Alex Ferguson, who also has an honorary degree from the university, joined Mr. Rashford’s friends and family to see him receive the award from vice-chancellor Professor Dame Nancy Rothwell.

On presenting Rashford with his degree, Dame Nancy said: “Marcus is an exceptional young man who continues to demonstrate a sense of community and generosity that goes well beyond his years.

“Our university also has social responsibility at its core, and we are extremely proud to share these values with Marcus.

“It really is an honor to finally present him with this well-deserved award on behalf of our institution.

“His ongoing charity work and high-profile campaigns not only help millions of people across the country but inspire many more to try and make a difference themselves. Long may it continue.”