Trump's Washington hotel where Atiku lodged in 2019 piles up debts 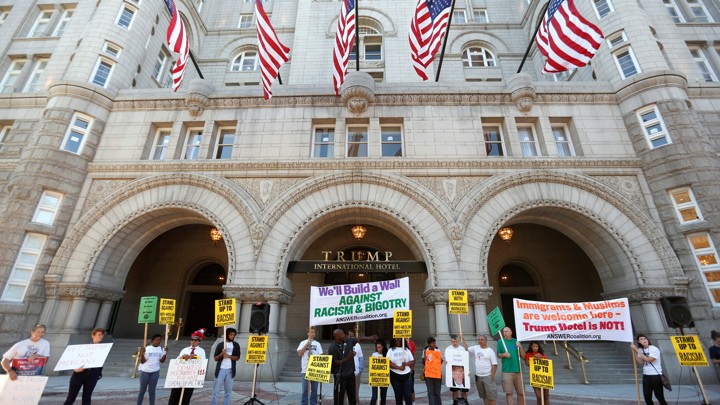 Former U.S. President Donald Trump’s hotel in Washington, where former vice president Atiku Abubakar and Senator Bukola Saraki lodged in January 2019 in the run-up to the election, is in dire financial straits.

The Trump International Hotel which is the favourite spot for his fawning supporters and foreign dignitaries bled millions of dollars during his time in office.

A U.S. House of Representatives panel said on Friday that the hotel lost $70 million during Trump’s time in office, though Trump reported that the hotel earned him more than $150 million.

The House Committee on Oversight and Reform, dominated by Democrats also found that Trump concealed payments from foreign governments,

The Committee said recently obtained government documents raise “troubling” questions about the hotel, which is in a historic building the Trump Organization leases from the federal government.

The committee found that the hotel received over $3.7 million in payments from foreign governments — roughly equal to more than 7,400 nights at the hotel, posing a potential conflict of interest.

The hotel gave a portion of that money to the U.S. government but failed to provide full details of those payments to the GSA, the committee said.

The committee’s investigation was based on documents released by the General Services Administration, the U.S. government agency that manages federal properties.

Provisions in the U.S. Constitution prohibit the president from obtaining payments, or “emoluments,” from foreign governments.

Trump’s lawyers have argued in court cases that his ownership of the hotel did not violate these constitutional provisions.

Congressional Democrats say the GSA stonewalled their investigation into Trump’s businesses while he was in office, but in July 2021 finally produced some of the documents they had been seeking.

The committee found that Trump moved millions of dollars through other businesses, complicating GSA’s ability to enforce provisions that prohibited him from collecting profits from the hotel.

The committee also found that he concealed debts when he was bidding for use of the property in 2011 and failed to disclose what it said were favourable loan terms from Deutsche Bank AG that financed renovations to the hotel.

A Deutsche Bank representative decline to comment on the record.

In a dramatic move in January 2019, Atiku rushed to Washington to shatter widespread belief that he could be arrested if he set foot on U.S. soil.

Well he went 17-18 January 2019, lodged in Trump hotel, met with top U.S. diplomats and congressmen and he was not arrested.

But in a later report, Reuters claimed Atiku was able to enter U.S. because of a temporary suspension of a travel ban linked to two decade-old bribery scandals.

Several U.S. government officials said the travel ban was waived temporarily by the U.S. State Department after lobbyists mounted a campaign among congressional lawmakers arguing that the administration should not snub the leading challenger to Nigerian President Muhammadu Buhari in the Feb. 16 election.