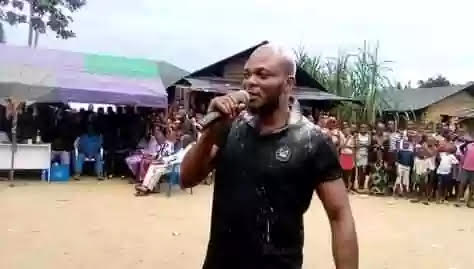 A notorious gang leader, David Joseph, popular known as “General Kumasi,” who was declared wanted and a bounty placed on him in by the Rivers State Government, has been shot dead.

Governor Nyesom Wike had accused him of involvement in criminal activities around Ahoada-East and Ahoada-West axis of the State.

Our Correspondent learnt that he was shot dead during a gun battle between his gang and soldiers in a forest in his Okogbe community where his gang carried out massive illegal oil bunkering activities in Ahoada West local government the area.

Reports from Okogbe community said there has been jubilation in the area since the news of his demise broke out.

As at the time of filing this report, the 6 Division of Nigerian Army, Port Harcourt, had not issue a statement regarding the incident, but several credible sources in Okogbe community said Kumasi died from injuries sustained from gunshots on Thursday afternoon along with some of his gang

Wike had announced that the state government had placed a bounty on the head of General Kumasi and one other alleged gang leader called “VIP”, over their involvement in criminal activities while receiving leaders from communities in Ahoada in Government House, Port Harcourt.

However, “General Kumasi” later spoke in an interactive live radio programme “Morning Crossfire” on Nigeria info fm, Port Harcourt, claiming Like was fed with lies and unsubstantiated allegations against him just because of his ambition to contest for the Ahoada-West Constituency seat at the State House of Assembly ahead of 2023 under the Peoples Democratic Party, PDP.

He had also alleged that top politicians in PDP in the area had vowed to eliminate him at all costs.

According to him “I don’t know why they have placed a bounty on me. I look at it as a way of tarnishing my image before the Governor because they know l have ambition to contest for Ahoada West State Constituency in State House of Assembly. They want to spoil my political ambition.

“I worked for PDP, I worked for politicians. I don’t know why they wanted to run me down now that I want to contest for House of Assembly seat. They know l have influence. They know that men and women are with me.”

Reacting to the allegations that he has been killing people, he said, “Since I accepted amnesty from the State Government in 2919, I have not killed anyone. When we accepted amnesty, we gathered all the guns, bombs and other arms we had to government and we signed all kinds of documents.

“I am not a rapist, I am not a criminal. If the Governor declared me wanted, as a leader, you supposed to hear from both sides before you conclude.”

He also claimed that Ekpeye people have enjoyed peaceful co-existence because of his efforts.

“I have been doing the work of Chief Security Officer in our area. I have refused to be used and dumped. I am a freedom fighter. I don’t kill innocent people. They should ask the Police and the Army in my area about my efforts, they will tell you about me.”

During the phone-in programme, Kumasi admitted being a former gang leader and cultist, but he claimed he has abandoned those ‘evil ways.’

Our Correspondent recalls that on June 2019, about 700 youths drawn from Ahoada West and Ahoada East including ‘General Kumasi and ‘VIP’ renounced cultism and embraced amnesty from State Government.