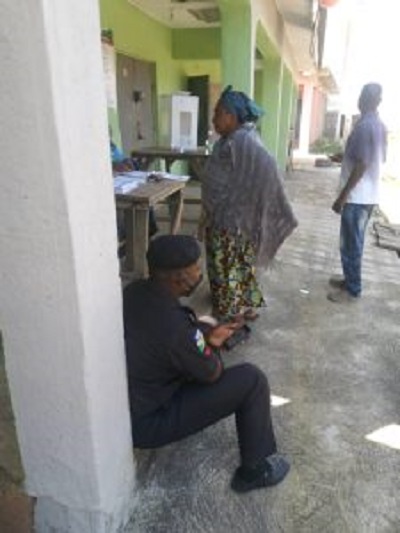 A woman casting her vote at one of pulling unit at Hwolshe, Jos.

The ongoing Local Government election in Plateau recorded voter apathy in Jos, the state capital, as most residents of the city shunned the exercise.

A NAN correspondent who visited some polling units in Jos North and Jos South local government areas reported that the people showed scant interest in the polls.

Some of the areas visited were Hwolshe, Tudun Wada, Jenta Adamu, Gyel, Bukuru low-cost, Rantya, Sha’aka, Abattoir, Zawan, among others, all in Jos North and Jos South Local government areas.

In Zawan district of Jos South, for instance, residents shunned the election in order to bury their loved ones, while others simply went to their farms.

At the polling unit located at the College of Mary Immaculate (CMI), Zawan, 12 security personnel were seen on ground with just six voters sighted trying to cast their votes.

Mr Pam Dung, attributed the low turnout to the disqualification of the major opposition party in the state, the Peoples Democratic Party (PDP).

Dung explained that the disqualification of the PDP was enough reason for him not to go out to vote.

“I’m not happy today because this is the first time in the history of this state that the PDP will not participate in the local government election.

“As far as I am concerned, it is only one party that is participating in the election today and I can’t waste my time and energy to go for such an election where we all know the result even before the end of the polls,” he said.

Another resident, Mr Ndibusi Emeka, said: “People will prefer to go to their farms than come here and participate in an exercise where they know that the vote won’t count.

“As a businessman, if not for the sit-at-home order, I will rather go to my shop where I make my daily earning than come here to waste my time,” he said.

However, Nandom Wuyep, another resident, expressed joy that the election had so far been peaceful and prayed that it remained so till the end of the exercise.

“I am happy because there is no violence here; you can see nobody is causing problems to the electoral officials.

“I pray and hope that the election will be conducted in some areas with the same atmosphere even with the voter apathy,” he said.