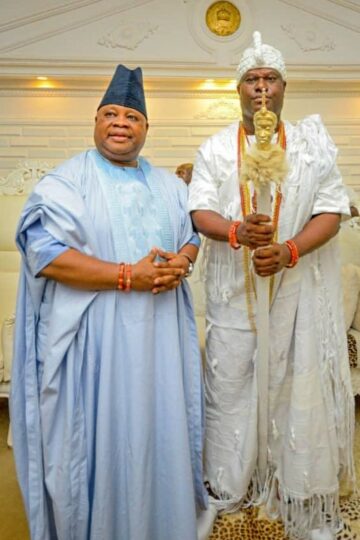 The Ooni of Ife, Oba Adeyeye Ogunwusi, Ojaja II, has debunked the rumour that Senator Ademola Adeleke had promised him a private jet gift.

The monarch made this known in a statement by his Directorate of Media and Public Affairs, following viral news after the gubernatorial aspirant of the Peoples Democratic Party (PDP), Senator Ademola Adeleke, paid a courtesy visit to the palace.

Moses Olafare, who signed the statement, urged the public to disregard a viral report that stated that Adeleke during his visit to the palace on Wednesday promised to procure an aircraft for the Ooni.

He said that there’s no such report issued from the palace despite the fact that the politician’s speech was twisted by some writers with hidden intentions, including to drag the respected stool of the Ooni in the mud.

The Press Secretary clarified that the truth could be sought from videos that emanated from the visit.

Olafare added that Ooni’s singular request was for a credible election, devoid of crisis for the betterment of all, which the PDP chieftain agreed to.

According to him, it is the usual character of all political office aspirants and party’s candidates without exception, including the visiting Senator Adeleke, to make several promises like the reconstruction of roads in Ile-Ife and completion of the Osun State Airport project at Ido-Osun, among others.

“Sadly, these developmental bullet points were mischievously ignored in the viral news reports.

“On the controversial “Private Jet”, it is a common knowledge that the Adeleke family has a fleet of private planes which could have been the basis for the governorship hopeful to have lightly said.

“Royal Father, private jet you may need for your trips are readily available,” he stated.

Olafare stated that it is ridiculous to see such misinformation trend on supposed credible news platforms, including national dailies.

According to him, the palace of the Ooni wishes to caution the general public from erroneously believing the false report as it is a lie from the pit of hell.

The Press Secretary said that “Adeleke’s visit was not the first and would never be the last political visit to the Ooni and other traditional rulers across the state as we are already approaching the election year in Osun while other aspirants including the incumbent governor, are still coming to make their promises as usual.”