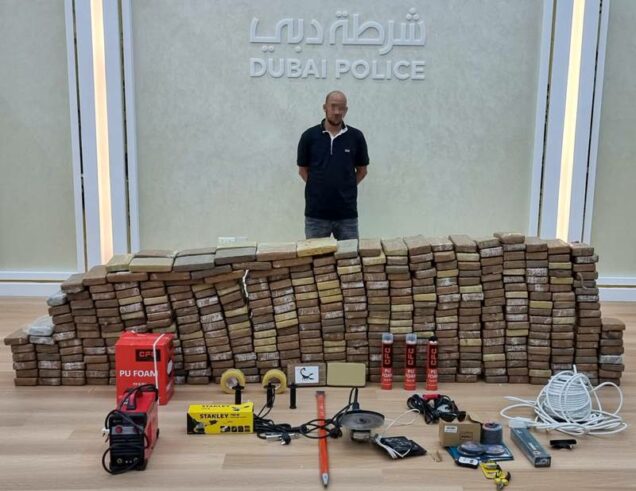 The police in Dubai have seized 500 kilograms of pure cocaine worth more than $136 million, about N55 billion.

The drugs, the largest ever seized in the region, were stashed inside a cargo container, shipped to Dubai.

The seizure followed a drugs raid, in which one person of Middle-Eastern origins was arrested.

According to the police, the suspect was operating as an intermediary for an international drug syndicate.

The UAE National newspaper reported on Sunday that the Dubai Police was tipped off before the arrival of the drug.

A lone suspect was found to be at the heart of the smuggling.

The police set up a task force to apprehend both the cargo and the people involved.

“An investigating team was immediately formed to verify and respond to the security tip,” said Brig Eid Hareb, Director of Anti-Narcotics Department at Dubai Police

“They monitored the suspect’s movements until he received the expected narcotics shipment.

“Once the shipment arrived, the suspect transported the illegal drugs to another emirate and stored them in a warehouse.”

Anti-narcotics officers set Operation Scorpion in motion, tracking the suspect’s arrival at an airport and his subsequent movements in Dubai in a round-the-clock surveillance campaign.

The target, who had rented an SUV, was spotted visiting a warehouse and caught buying cutting tools while being closely monitored.

The smuggler tried to evade officers, making a sudden turn while driving to a warehouse to unload the huge haul of drugs.

Police kept him firmly in their sights and arrested him at the scene.

Drugs and cutting tools were seized from his car during a search.

Dozens of packages of cocaine were later found, in what Dubai Police described as the largest drug seizure in the region.

Colonel Khalid bin Muwaiza, deputy director of the General Department of Anti-Narcotics, said the suspect confessed to the crime and was referred to the Public Prosecution for further legal action.

Police in Dubai remain determined to stay one step ahead of criminals – and keep drugs off the streets.