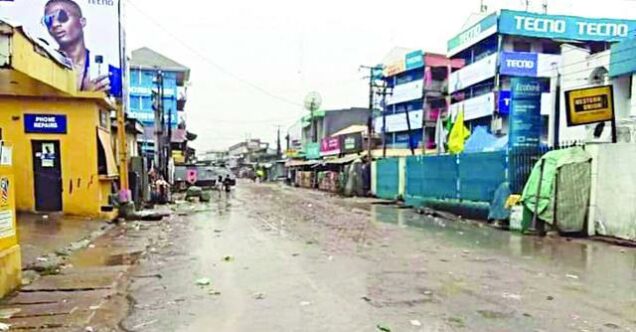 A deserted road in Umuahia

Economic activities ground to a halt on Monday in Umuahia, following wild rumours that some hoodlums have begun the enforcement of the sit-at-home order of the Indigenous People of Biafra.

The rumour, which spread throughout Umuahia and its environs, around 10am, caused palpable fear and pandemonium among the residents, most of whom were barely settling down for the day’s activities.

Shops, business centres, banks in the metropolis were abruptly shut, while tricycle operators, motorists fled to different directions for safety.

The situation persisted throughout the day as many residents, including bank workers and shop owners, who ran for their lives could not reopen for business.

Some residents, who spoke on the incident, said they were forced to run “to avoid being attacked by unknown gunmen.”

A dealer in sandals and footwear on Aba Road, simply identified as Iyke, told NAN that he did not see any reason to run.

“I didn’t see anybody. People were just running without any justifiable reason.

“In fact, I learnt that the stampede started from the Aba Park, where some touts were said to have engaged a “Keke” operator in a brawl.

“From that point, some of the keke operators, who saw what was happening, started raising the alarm while in transit, asking people to flee for their lives.

“In the process, there was confusion and pandemonium everywhere, leading to shops being forced to close,” the trader said.

A dealer in stationeries at Isigate, who corroborated Iyke’s account, also said he could not ascertain the cause of the pandemonium.

He told NAN on the condition of anonymity that “the rumour was thick, so people had to flee to avoid had I known”.

He said that recent security challenges in the area “made it possible for people to succumb to rumours, real or not, about attacks by unknown gunmen or bandits”.

NAN also learnt that the Ubani Ibeku Ultra-Modern Market was shut as traders hurriedly packed their wares, shut their stalls and fled home.

Another version of the rumour had it that some hoodlums, allegedly sympathetic to the cause of the proscribed Indigenous People of Biafra (IPOB), attacked the Onuimo Market situated in Obowo, the boundary community between Abia and Imo.

Some said it was the rumour about the attack on Onuimo that spilled into Umuahia, leading to the panic and pandemonium.

NAN recalls that IPOB had severally announced a cancellation of the sit-at-home order, which it issued as a show of solidarity to its Leader, Nnamdi Kanu, who is incarcerated and facing charges bordering on treasonable felony.

The IPOB directive for people to discontinue with the order, notwithstanding, some hoodlums have continued to enforce it in Aba, the commercial hub of Abia, and neighbouring Imo.

Meanwhile, the Police Public Relations Officer in the state, SP Godfrey Ogbonna, said there was no genuine reason for the pandemonium in Umuahia.

Ogbonna said the command was on top of the security situation in the state and advised residents to go about their normal daily businesses without any fear of attacks.