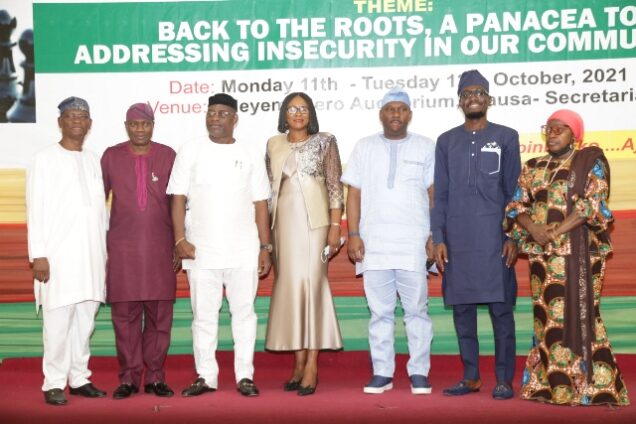 Ahmed, who was represented by the Permanent Secretary, Mrs. Kikelomo Morenike Sanyaolu said over the years, the State government had committed time and resources to conduct periodic trainings for members of Lagos State Community Development Advisory Council (LSCDAC), to equip them in playing their roles in bringing government closer to the people and to also reiterate Governor Babajide Sanwo-Olu’s policy of inclusiveness.

“No doubt, this year’s training is one of the many efforts of the State Government under the administration of Governor Babajide Olusola Sanwo-Olu to empower our Community Development Council (CDC) and Community Development Area (CDA) members to align their various CDCs and CDAs in accordance with the State’s plan for a greater Lagos; the Lagos of Our Dreams.

“In addition, it is part of the State government’s effort to drive the policies of this administration and replicate governance and leadership at the grassroots,” he said.

Ahmed stated that everyone knew the importance of security towards guaranteeing and protecting everyone, but that the government alone could not do it, saying that these collective efforts must become a part of “our daily life, something that each woman and man can count on. This, as a matter of fact, must commence from our various roots, which are our various CDAs and CDCs.”

He explained that in the next two days, the State government would be providing them with the knowledge needed to move towards effective collaboration, as seasoned resource individuals had been carefully selected to take them through different topics to enlighten them on improved ways and tactics to adopt when it comes to addressing insecurities in the various communities.

Ahmed implored participants to see the training as an opportunity to learn the rudimentary of leadership for governance as it relates to ensuring peace and “stability in our little corner”.

“It is important for us as CDAs and CDCs to enlighten organisations and individuals in our communities who have resources to employ people to always ensure adequate background checks are done on individuals we intend to employ. This will help us guide against employing criminal elements that can cause chaos and anarchy in our communities.

“It is important that adequate checks should also be done when employing Security Operatives (Community Gatemen/House gatemen) in our communities, because most times, it is the crack in the wall that gives room for lizards.

“Let me also iterate that your roles as grassroots leaders should collaboratively support the effort of Mr Governor in ensuring safety of lives and security in our State. In times like this, we cannot afford to hoard security information; if you see something, you must say something.

“I am sure that with the up-to-date information and security tips that will be available at your disposal through this leadership training, our communities would be safer and more secure. I urge you all to ensure that it is keenly documented, adopted and applied into the security fibre of our various communities to help improve safety and security,” he stated.

Special Adviser to the Governor on Community Development, Babatunde Jimoh, said security is much of a collective effort than an individual effort and that this was why it behooves on CDA/CDC members to seize this opportunity to learn and re-strategise security across every stratum in their communities.

He said one of the policy thrusts of Sanwo-Olu’s administration is crested in the THEMES Agenda which is Security and Governance and that the governor had committed himself to this since the inception of his administration.

“This year’s theme, “Back to the Roots: A Panacea to Addressing Insecurity in our Communities” captures this fundamental policy and shows Mr Governor’s priority that we all live in secured and safe communities.
“This is why we must seize this learning opportunity to equip ourselves with all that we need to engender security in our communities.

“We must, therefore as good people of Lagos play our little but crucial roles in supporting Mr Governor by contributing to the safety of our communities through our ability to translate all that we would be learning in the course of this training into our communities,” he stated.

Jimoh urged the CDAs and CDCs not to forget that they all have roles to play, as security has become everybody’s business.

Similarly, the Chairman, House Committee on Local Government and Community Affairs, Hon. Olawale Abdulsubor commended Lagos State Government for its proactiveness in tackling security challenges through Security Trust Funds and partnership with security agencies, stressing that the Lagos House of Assembly is ever ready to enact people friendly laws, as demonstrated in the recent enactment of the laws in kidnapping and the passing of the bill that created Lagos Stare Corps, to strengthen safety and security of all residents in the state.

Also, the chairman, LSCDAC, Alhaji Azeez Amusa, in his goodwill message applauded Mr Governor for recognising the little quota the council contributes in ensuring safety and security in communities.

He charged participants to put all hands on deck to support security operatives by ensuring that community leaders make conscious effort to guarantee safety in their communities through intelligence gathering and prompt reportage of such to State authorities.

In the same vein, General Manager, Lagos State Neighbourhood Safety Corps, Mr Ifalade Oyekan assured that the corps would continue to partner with community leaders in its commitment to achieving the mandate that necessitated the creation of LSNSC, which is security and safety in the communities.

Commissioner of Police, Lagos State, Mr. Hakeem Odumosu, represented by ACP Jide Agboola called on community leaders to prioritise the education of their children and the establishment of vocational centres to curb idle hands which might resort to armed-robbery, land-grabbing, touting, child-abuse which ultimately lead to insecurity.

He appealed for support of the members of the communities whenever the need arose.

Also, Mrs. Olajumoke Otitoloju and other facilitators appealed to community leaders and chairmen at the council level to come together to focus on children’s care to effectively represent their interest in solving security challenges in the communities.