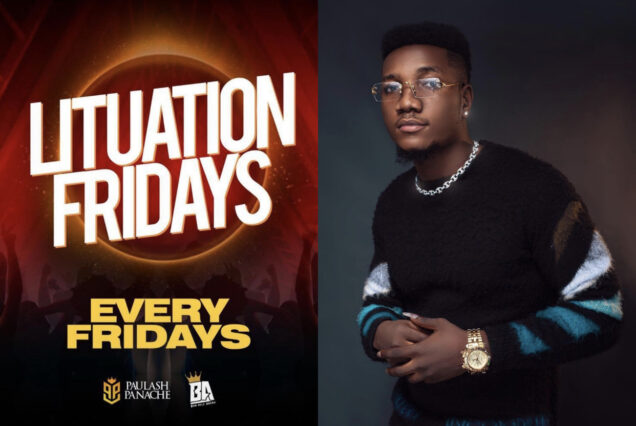 After the first edition was held in 2019, Paulash who is also a brand strategist, and social media influencer alongside his partner, Bamidele Adams turned it a weekly festival.

“Lituation Fridays started 2019. It is a weekly event that happens every Friday where we get to celebrate life and ease out the stress. We first started at club 57 Ikoyi, but then it was called “Friday Lituation “the best Fridays in Lagos,” he recounted.

The initiative is synonymous to TGIF! Get me lit! where Paulash and Bamidele get to host a couple of birthdays, trending personalities and celebrities and also promote new talents and the weekly show has been waxing stronger from the start.

“This is where we have A-list artistes and other upcoming acts coming to grace the stage, couple of birthdays, and good vibes in general and all that makes a party lit.”

Paulash who is also a musician went ahead to release an anthem to promote the weekly show when it was truncated by COVID-19 pandemic. The song title “Lituation” featured Shugavybz, Roger Lino and Leeroy Afrika.

“The first phase of COVID-19 lockdown truncated the whole process so during those times we came up with an anthem to promote the night show, that was why we dropped the “Lituation” song December 12, 2020 to kick off a new phase then the 2nd phase of lockdown started again.

“Then August 13, 2021, we rebranded to “Lituation Fridays” which kicked off at Caesars Lounge Victoria Island, then on September 17, we moved to BLVD Lekki because we needed a bigger venue, to host people” he added.

Paulash further revealed that as a club promoter, he has worked with Lagos top clubs such as Quilox, Rumours, Cubana, Phantom, House 38, Club Litehouse, The Place, Crystals, Club 57, among others.

Paulash has received several nominations in recognition of his works and has also won several awards.