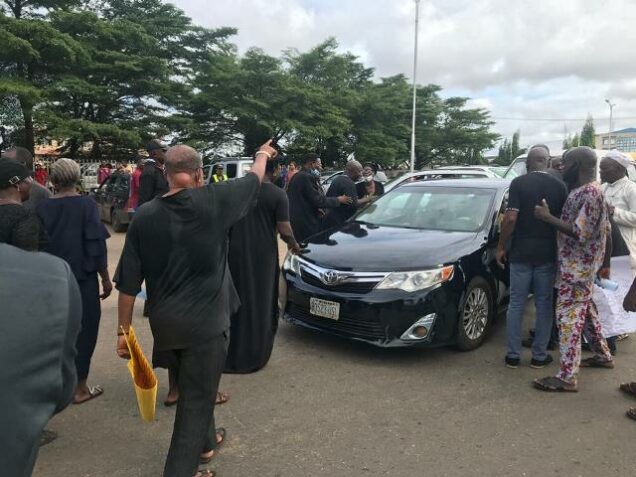 A senior citizen in Edo State, (name withheld) on Monday collapsed during a protest by pensioners who were protesting alleged unpaid gratuities, non-harmonization of pensions, among other welfare issues.

The protest was carried out under the umbrella of Association of Retired Civil Servants Welfare of Nigeria (ARCSWON) in Edo State, at the popular Oba Ovonramwen Square, popularly called Ring Road.

The male retiree who collapsed at the protest ground had to be rushed to the nearest hospital for treatment.

The peaceful protest however resulted to traffic congestion for several hours in major roads such as Sapele road, Sakponba, Ekehuan, Uselu-Ugbowo axis and Airport road linking the city centre, and hindered easy flow of movements by commuters plying the roads to their respective destinations.

Dressed in black attires, the retirees who chanted solidarity songs, carried placards with inscriptions such as “pensioners need gratuity to take care of our health and our families,” “Pay our gratuity and harmonize our monthly pension.”

The senior citizens who lamented that their allowances were far depleted by inflation and expensive cost of daily living, asked the State Government to accede to their demands.

Spokesman of the pensioners, Yusuf Bako, kicked against what he described as illegal deduction from their monthly pensions.

Bako, who was a former Chairman, Association of Senior Civil Servants in Edo State, threatened grandfather-of-all protest, should the government fail to grant their request.

He said: “This is a warning outing, the grandfather of the protest will come soon. On that day, we will carry pot, bed and stove to occupy this place even if it rains or it’s sunny. We will not leave until they grant our demands. But for today, we will leave because issues are resolved on a table.

“As regards the issue of one percent being deducted, we are going to ask them to stop it and refund the ones they have collected.

“The number one issue on ground is gratuity. Since 2012, State Government retirees have not received their gratuities while that of local government since 2008. We also have issues with harmonization of our pensions; as at today, the teacher that taught me geography receives N4,000 a month.

“In addition to these issues, the government joined hands with the union to collect from the small pension we receive and shared it with the union. We have rejected that, and that is why we are out today to tell them we will not die,” Bako said.

He, therefore, urged the government to urgently effect harmonization owing to the diminishing purchasing power of naira.

A representative of the Edo State Pension Bureau, Osaro Washington, who addressed the protesting pensioners, assured that all hands are on deck to sort the issues raised by the aggrieved senior citizens.

“We have asked them to put on hold the one percent deduction until further notice. We are not owing any pensioners. What they are saying is their gratuity. We have told them times without number that the payment will be done as quickly as possible and we are holding meeting with all stakeholders on this particular issue,” Washington said.